This is an article from Simon Anthony, a one-time theoretical physicist.

A few days ago, in response to an article by Hector Drummond on the Critic website, I wrote a short piece, also carried by that website. I argued that, if the sex ratios of non-Covid-19 deaths haven’t been changed by the advent of C-19, the number of deaths attributed to C-19 in the each of two recent weeks of data from ONS has been over-attributed by more than 3,000 each week.

I thought it would be useful to test the underlying premise – that 2019 sex ratios of deaths are a reasonable approximation for recent non-C-19 deaths – by seeing how it held up in other circumstances. The first and most obvious question was how many C-19 deaths would be estimated for the weeks before C-19 arrived? Ideally it would be zero but in practice sex ratios fluctuate at random which potentially might lead to wildly wrong estimates. Here are the estimates for C-19 deaths since mid-January based on unchanged sex ratios (USR) compared with ONS attributions. 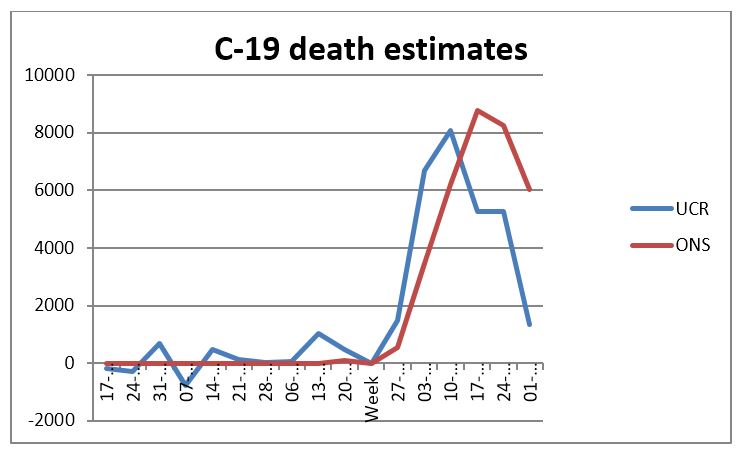 That looks plausible – there are fluctuations around zero for the weeks before C-19 arrived are but they’re so small that there’s no possibility of mistaking the ‘noise’ for the signal: USR seems to reliably pick up the presence and magnitude of C-19. 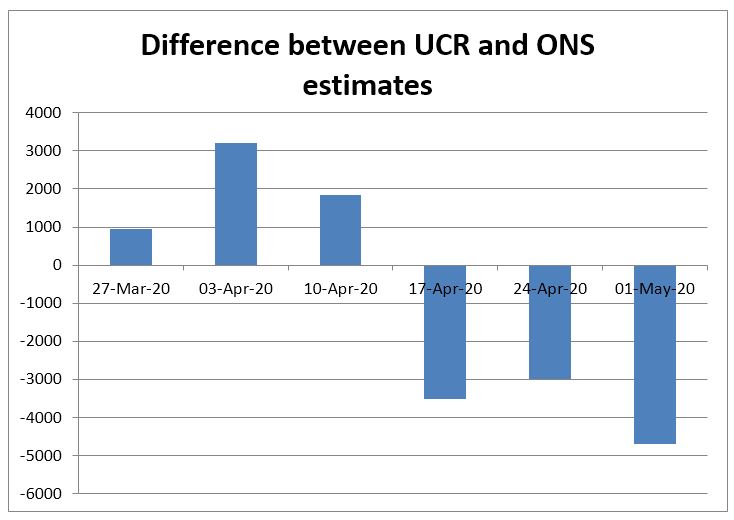 From an apparently reasonably stable pattern (USR>ONS) there’s an abrupt reversal to another (ONS>USR). Did this switch have a cause or is it just a random jump?

I thought it would be worth seeing what might have caused such a transformation. The obvious initiating event took place on 25 March when the Coronavirus Act received Royal Assent. Under the act the criteria for attributing death to C-19 were set out. On 31 March, the government published guidance on ‘Completing a medical certificate of cause of death’ (MCCD). This was updated on 1 April. Over succeeding days, other government guidance notes (e.g. for medical practitioners completing cremation forms, updated on 3 April) were updated.

While it would be untrue to say that the guidance ‘encourages’ attribution of deaths to C-19, its first sentence is ‘In an emergency period of the COVID-19 pandemic there is a relaxation of previous legislation concerning completion of the medical certificate cause of death’.

Particular criteria for naming C-19 as cause of death (CoD) have been relaxed compared to those of other causes of death. For example, the MCCD can be completed by any doctor, whether or not they saw the deceased before or after death, pre-mortem C-19 symptoms without a test result can be certified as a C-19 death (the cause of death may be re-assessed when the test result is available) and CoD as ‘old age’ and variations is strongly discouraged if C-19 is present.

Over the following days other organisations published and publicised advice on the guidelines. For example, on 4 April, the Royal College of Pathologists published guidance on the implications of the C-19 Act for death certification and registration. On 6 April the MDU (Medical Defence Union – leading UK provider of indemnity against clinical negligence) published its advice on ‘Certifying deaths during Covid-19 outbreak’. On the same day, GP Online published an article from the MDU on the same topic. On 8 April, Pulse Today published an article on the Chief Coroner’s Office guidance on completing MCCD during the C-19 outbreak. And so on.

So, starting in the first week of April, guidance was widely shared with those responsible for completing MCCD forms. This guidance both highlighted C-19 as a CoD and loosened the criteria for its attribution. It’s also worth noting that ONS attributes a death to C-19 where COVID-19 was mentioned on the death certificate’ i.e. C-19 may not be named as the direct CoD but would still be attributed to C-19. It seems likely that all these factors would tend to increase the number of deaths attributed to C-19.

As for detailed timing, the ONS records deaths by date of registration rather than date of death, often leading to delays of a day or more between death and the ONS recording of the event. As the guidance was disseminated during the first week of April, it seems likely that recorded deaths would begin to show its effects only some days after that time. The switch (according to USR) from under- to over-attribution of C-19 deaths seems to have happened on ~10 April, which is consistent with this sequence.

While I can’t be sure that USR is a reliable way to accurately assess how many people have died from C-19 rather than as excess deaths from non-C-19 causes, it correctly identifies the presence and scale of the C-19 outbreak and correlates reasonably well with other methods of attribution (e.g. ONS). If correct, it seems to show that, possibly due to pressure from government guidance, recent deaths have been over-attributed to C-19.

It’s worth noting that, before guidance was issued, deaths were (according to USR) under-attributed to C-19 as might be expected because of the commonality of many of its symptoms with previously more common CoDs. However, the earlier under-counting has now been more than compensated for by the recent over-reporting of C-19. 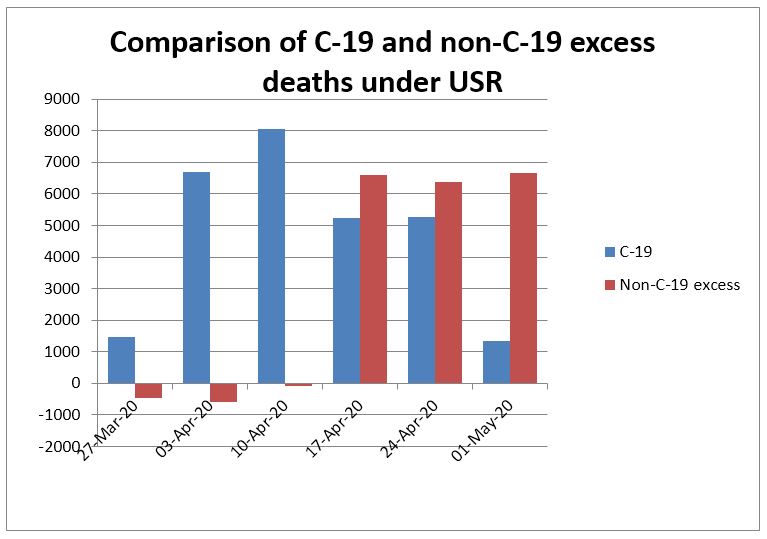 11 thoughts on “Simon Anthony: How many people have really died from Covid-19?”