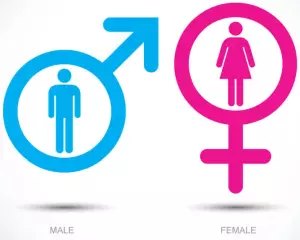 This is an article by Eva Dehlinger.

Biology is a real thing. We can see its elements and name them and measure them. In humans, chromosomes, DNA, gametes, hormone levels, and primary and secondary sex characteristics can all be identified, named and measured. From that information, almost all humans can be classified as definitively belonging to one of two distinct groups referred to as sex: man and woman, boy and girl, male and female. There is some diversity within the specific characteristics and how they express, but not so much diversity that the two groups cannot be clearly defined and understood. This is evidenced over thousands of years by successful procreation, observed physical development and bodily function, scientific research and medicine. Humans are dimorphic.

Of course, there are also a very small number of exceptions.

These two sex categories are used extensively. Before a baby is born, tests can show the sex of the baby and in almost all cases this ends up being correct. Parents and doctors are confident in the results of these tests. Based on that confidence, some babies are aborted because of their sex. What two words should we use for the categories that this test can confirm?

When a baby is born, doctors and parents are almost always confident in recognising and identifying the baby’s biological sex. This confidence leads to some babies being abandoned, specifically due to that sex category. What word should we use for the sex of those babies?

Parents, doctors and individuals need an understanding of the spectrum of normal anatomy and physiology within the two sexes to measure against. Anomalies and differences exist. It’s helpful to be able to spot anything that might actually indicate a problem. This is true regardless of how a person feels about their sex or their gender.

The two sexes have different physical health needs relating to their distinct physiology and may need different care during their lives. Only one group will potentially menstruate, become pregnant, give birth and go through the menopause. Additionally, the two groups may suffer disproportionately from different diseases and conditions and respond differently to drugs and medications due to their anatomy and physiology.

We only know this because we have identified people by their sex category when monitoring populations over time to see which diseases manifest, and how, and which treatments are effective. This is valuable and important information in healthcare choices as well as in the prevention and treatment of disease in the population. The knowledge was established without considering the individuals’ feelings about their sex or gender.

People use DNA tests to establish paternity. They use them to find and explore ancestry and genetic family. The huge DNA databases, including data from millions of people, confidently identify the sex of the person submitting the DNA as well as the sex of their ancestors. Millions of people do these tests and understand, without confusion, the information the DNA sites provide about their genetic families. One line is female and one line is male. The categorisation comes from a test that has no interest in how any of those individuals look, feel or identify in terms of their gender, which for the majority will never be known.

These DNA tests are neutral.

If a body is found dead or unconscious, or a person is for any reason unable to express themselves clearly, then being able to identify which of the two sex categories they fit into is helpful. If a young child is missing or a dead body is discovered, we cannot know their gender. But we can ascertain their sex and that categorisation would help as part of any investigation or search. We can say, ‘We have discovered a dead man’ or ‘We have found a lost little girl’.

Given the list of scenarios above, which is probably not exhaustive, it seems clear that we need specific words to name the two biological sex categories, separate to any definition of gender identity or the feelings of an individual. What should those words be?

Traditionally, the words for these two sex categories (referring to biological sex not gender) are man and woman, male and female. These words are used and understood the world over. If the definition of those words changes, we will have to find new words to cover the examples above.

Cisman and ciswoman, whilst meaningful in some contexts, won’t work. The addition of cis relates to how people feel about their sex, their gender, their identity and potentially how they express that. Not everyone has a feeling about their gender and some people would be uncertain about defining themselves in that way. These people still need a clear, specific word to describe their biological sex.

Similarly, DNA tests, foetuses, babies, young children and dead bodies can’t clarify feelings on gender. A test during pregnancy can’t say, ‘The baby is a cisboy’. The police can’t say, ‘The dead body is a cisfemale’. We can’t know whether they identify as trans or cis or neither, but we still need a word for the biological sex of the baby or the dead body.

Ancestry websites cannot say how the person they have matched as your genetic mother or grandmother identifies or identified. But they know her biology. They know she is female. And paternity tests will identify the father, who will be male (even if they identify as trans).

We need words to describe this reality. We need words for biological sex and words for gender identity and then we need clarity over how they are defined and used socially and legally. Using the same words can’t work. If the words man and woman, male and female, don’t mean biological sex we will have no choice but to go down a tortuous path of finding and agreeing new words for the two essential sex categories. Otherwise how can we express ourselves in the examples above?

Does it make sense to do find new words and what would they be?

Could that realistically work?

Should we keep the definition of man and woman as relating to biological sex and expand our vocabulary so we have fabulous new words for gender identity for those that wish to use them?

12 thoughts on “Eva Dehlinger: A word for everything”