For a large part of 2020 anti-lockdown proponents argued that Sweden’s death figures showed that Covid-19 wasn’t anywhere near as dangerous as the lockdown fanatics were making out. Such claims were met by an avalanche of trolls who shouted “WHAT ABOUT NORWAY” and “SWEDEN IS A DISASTER AREA”. The trolls’ angry shouts led people to believe that Sweden, whose scientists refused to follow most of the rest of the world in requiring lockdowns and social distancing and masks, was a killing field, with mass deaths caused by murderously reckless scientists.

Even six months ago an objective look at Sweden’s figures showed this take to be arrant nonsense. Their all-cause death numbers over spring (the worst months for Covid), were completely normal by the country’s historical standards, and nowhere near even being the worst months in the last few decades for Sweden, let alone in the last hundred. Here, for example, is a graph showing that the period January to April in Sweden was completely normal when compared to the same January to April period in the past thirty years. (All graphs can be clicked to enlarge.) 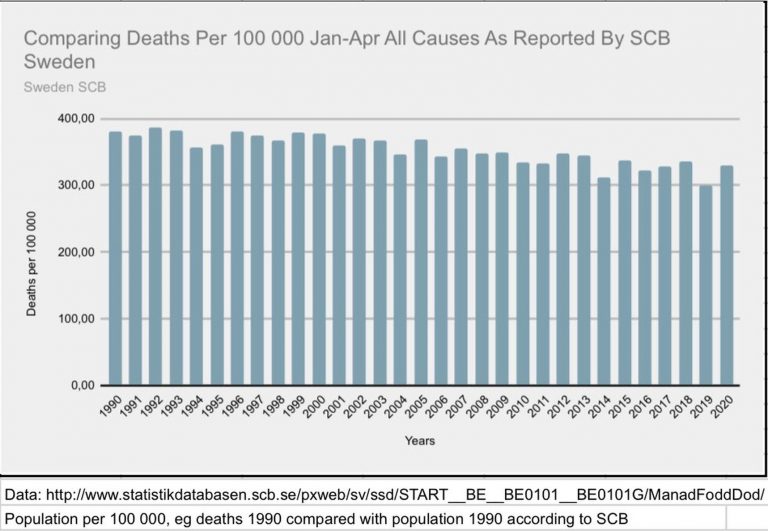 But what about April, that worst month of that period, you may say? Well, here’s a graph of the worst months in Sweden since 1990. 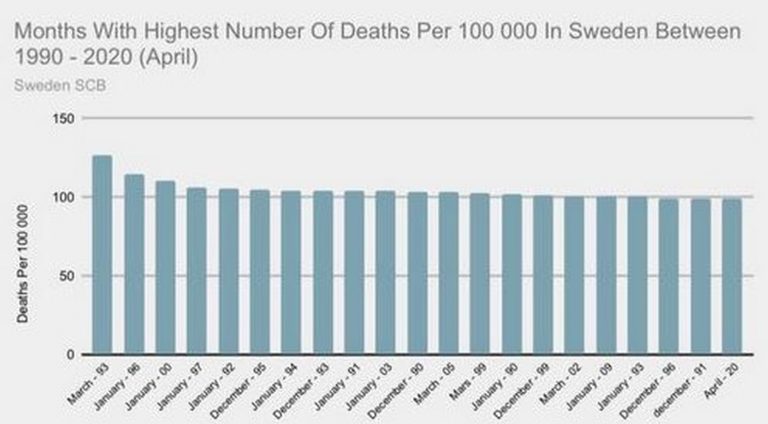 You will see that April 2020, supposedly the worst month for the world in hundred years outside wartime, in fact had lower deaths than about twenty other months in Sweden in just the last thirty years.

Most governments, scientists, and media outlets have inexcusably ignored these facts for over half a year, and when forced to look at Sweden they have continued to spin the line that Sweden is a charnel house.

Now, ten months since the Western world went mad, the overall figures for Sweden’s all-cause mortality for 2020 are available. And it is time we had a proper look at these figures and stopped taking this lunatic mania for lockdowns seriously.

Here’s a graph of the all-cause death rate for Sweden, going back to 1851. This graph was produced by Johan Hellström using data from Statistics Sweden, the official Swedish government statistics agency.

If you jumbled up all these years and then asked one of the doomsayers to pick out the holocaust that is 2020 in Sweden, they wouldn’t have a hope in hell of being able to do so. Because not only was there not a holocaust in Sweden in 2020, there wasn’t much of anything in Sweden in 2020. There were a few more deaths than in the last five to six years, but 2020 was in fact one of the least grim years for mortality that Sweden has ever seen. Far from being a once-in-a-century disaster, 2020 saw less deaths than 2012. And less deaths than over 90% of the previous 168 years – far less, in most of these cases.

2020 was supposed to be the year the world faced the worst killer disease for a century, yet if you go back a century to 1919 on this graph you can see a spike sticking out of the data above all the other years. That was a bad year, especially seeing as many of the lives lost in that year (to the Spanish flu) were those of young people, which is most definitely not the case with Covid. Is 2020 anything like 1919? No, not remotely. Anyone who tells you different is either woefully ignorant, and if they continue to tell you that after seeing this chart then they’re a liar.

We have seen a multitude of graphs on all sorts of Covid and lockdown-related matters over the last ten months. But this is the one graph that kills the case for lockdowns and all the other restrictions stone dead. Sweden’s government did not enforce social distancing, it did not enforce mask-wearing, it did not lock people up in their own homes, all the things that most other governments insisted were totally necessary to avoid mass death, and which had to be enforced with massive fines (recently two young men from Leeds were given fines of £10,000 each for starting a snowball fight). Yes, Sweden had a few restrictions, such as closing high schools at various points (which we know makes very little difference to Covid spread), and in recent weeks some more restrictions have (totally pointlessly) been brought in, but generally Sweden has been free of lockdowns, restrictions and masks. Yet far from seeing any sort of disaster, Sweden saw only slightly elevated death levels compared to recent years, and a death rate less than almost every year in their history before 2012. This tells us that Covid is about as dangerous as a very bad flu, but no more. And no-one in their right mind thinks we should shut the world down indefinitely for a bad flu.

You can also see on this graph the fact that Sweden had an exceptionally low death rate in the year 2019. It was, in fact, easily the lowest year in Sweden’s recorded history. And this was after a number of years of lower rates. We can surmise, then, that Sweden was building up a number of very elderly people who were near the end of their life and who would be vulnerable to a nasty flu-type virus. It is very rare for any country to have continual decline in their annual death rate for more than a decade; usually the numbers go back upwards again for a few years as those people eventually die. The contrast between 2019 and 2020 is nothing unusual, and when we average them together we end up with a death rate for that two-year period that is completely in line with the recent average.

Nor is it true, as is often claimed, that all Swedes voluntarily stayed at home and practiced social distancing around other people like the British did, despite it not being required by the government. First of all, we can compare Google’s mobility data between the two countries to see that while there was some amount of this happening in Sweden, it was not happening to anything like the same extent as in Britain, especially during the worst spring months. Here are some charts I have made based on Google’s mobile phone tracking data (taken from Our World in Data). 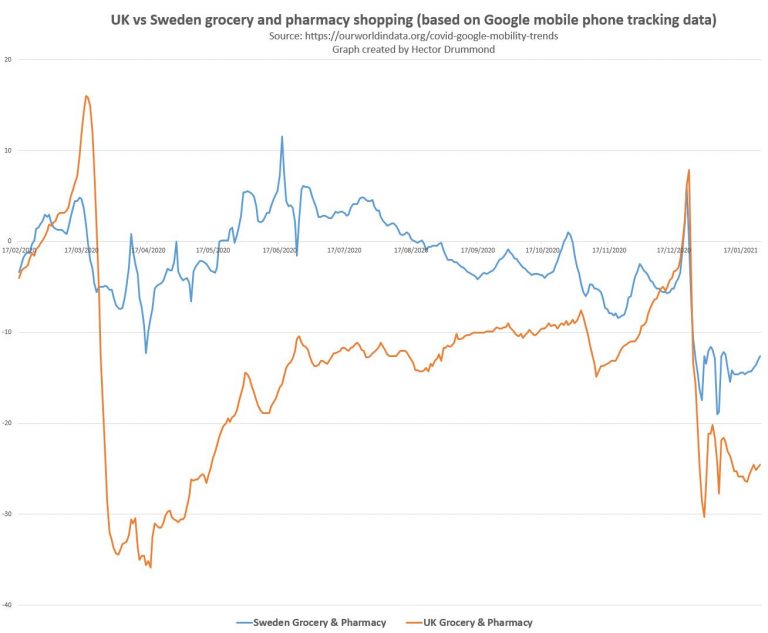 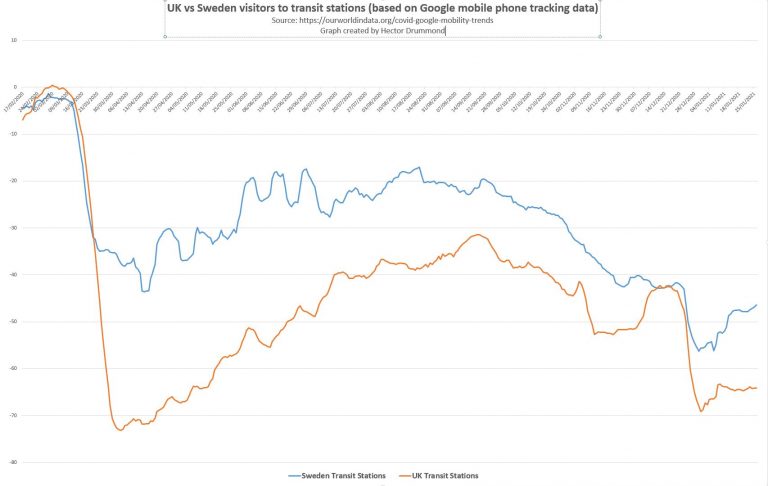 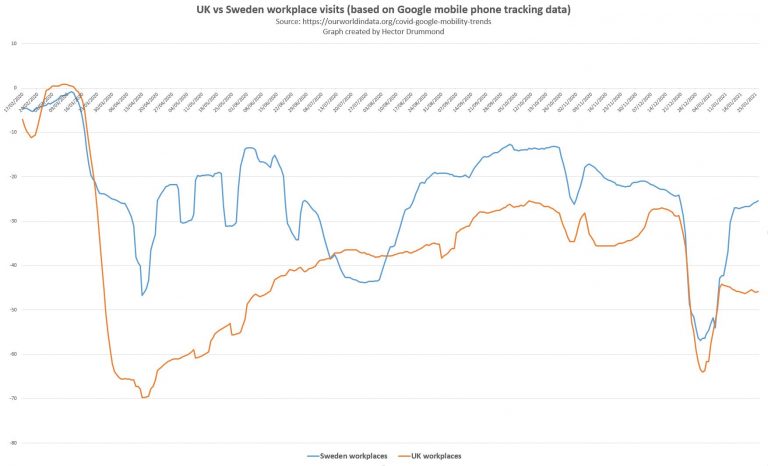 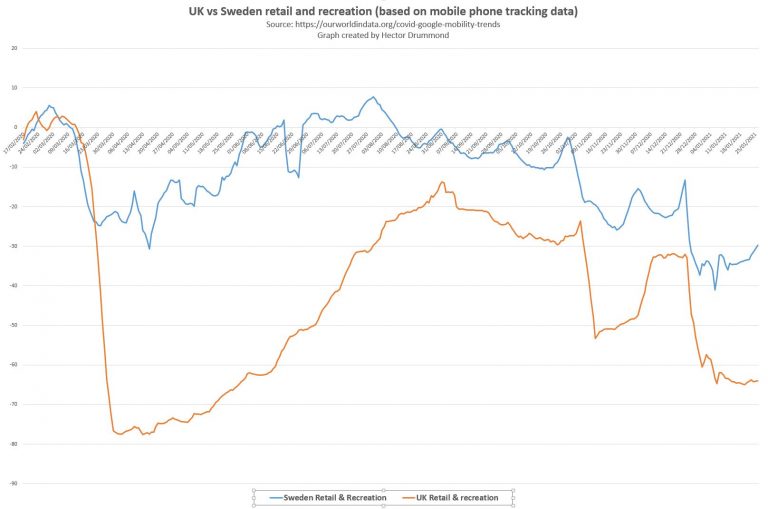 Further evidence that there was no de facto lockdown comes from the numerous videos posted by Swedish people showing normal life going on in Swedish cities, with no social distancing and no masks, as well as documentary footage made by people such as Sean Collins and Simon Dolan who visited Sweden with a film crew.

Another excuse often trotted out is that Sweden is less urbanised, and has less urban density, than Britain. Again, this is not true. The “urban population (% of total population) in Sweden was reported at 87.71 % in 2019, according to the World Bank collection of development indicators, compiled from officially recognized sources”, while Britain’s “urban population (% of total population) in United Kingdom was reported at 83.65 %” in the same year. As far as population density goes, according to World Population Review, greater London has a density of “14,550 residents per square mile in the Greater London area”, while Stockholm has “13,000 per square mile”. (This issue does get more involved the more one looks into it, but overall it is just not true that there is any significant difference in urban density between the countries.)

This whole line of argument is ridiculous anyway. On the one hand we’re supposed to believe that Covid is the modern equivalent of the Black Death which must be met with historically unprecedented restrictions of freedom, but also we’re supposed to accept that it can be mostly defeated if your urban density is a bit more spread out than England’s. What kind of a medieval plague is it that is stymied by a country’s houses being possibly slightly further apart than another country’s?

Sweden’s economy is in a good place. Its GDP was only down by -2.5% for the year, and that was all caused by the irrational actions of the countries it trades with, not itself. The UK’s GDP, on the other hand, was down by -8.6% for the year, one of the biggest dips in its history, and more than three times Sweden’s. (GDP figures are from Trading Economics; scroll down the front page.) Even this figure is misleading, because it covers up the underlying damage currently being done to many of the UK’s sectors, and we have to take into account the incredibly high volumes of money the UK government is still continuing to borrow every day. But this is not the place to go into detail about the economic issues; suffice it to say that Sweden is doing okay economically, whereas Britain is not. Overall, the Swedish people had a normal year in 2020. Britain could have done so too had they seen sense and copied the Swedish approach.

Unfortunately pressure has been brought to bear upon the Swedish establishment from the rabid members of various international bodies, and through false media depictions of the country, which has meant that Sweden, despite its amazing success, is now starting to introduce restrictive measures, although generally the country remains relatively free of restrictions (Dr Sebastian Rushworth, a Swedish GP and lockdown sceptic, tweeted a picture of the rush-hour trains in Stockholm few days ago and said “Few masks. The claims of a Swedish lockdown are greatly exaggerated”. The fact that some Swedish politicians and royalty are starting to call for more restrictions in response to this pressure doesn’t provide any sort of justification at all for lockdown, and the data shows that it is totally unnecessary. Sweden was a shining beacon of freedom and rationality in 2020, and it should stay that way, and we should join them, rather than them joining us in our miserable, pitiful, and ruinous state.