So our indefatigable graph-makers David Clark (who does this sort of thing for a living) and Robert Watson (retired Professor) have been hard at work making some updated graphs based on the latest ONS figures, released 31 March. The figures go up March 20 (the end of what their system calls week 12). 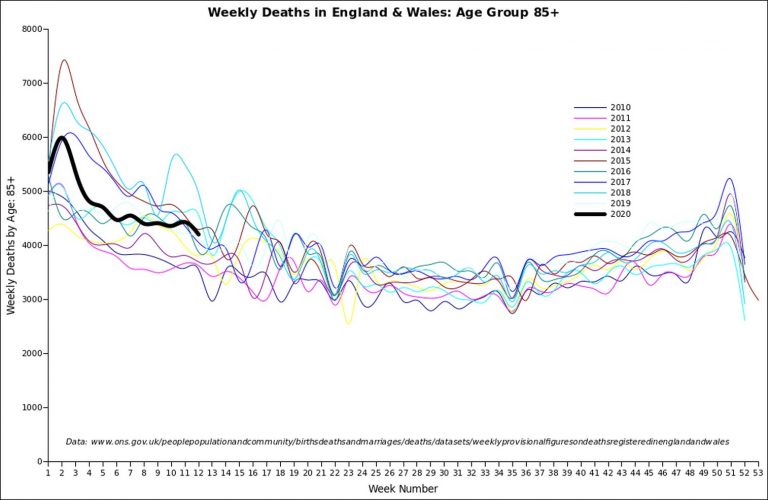 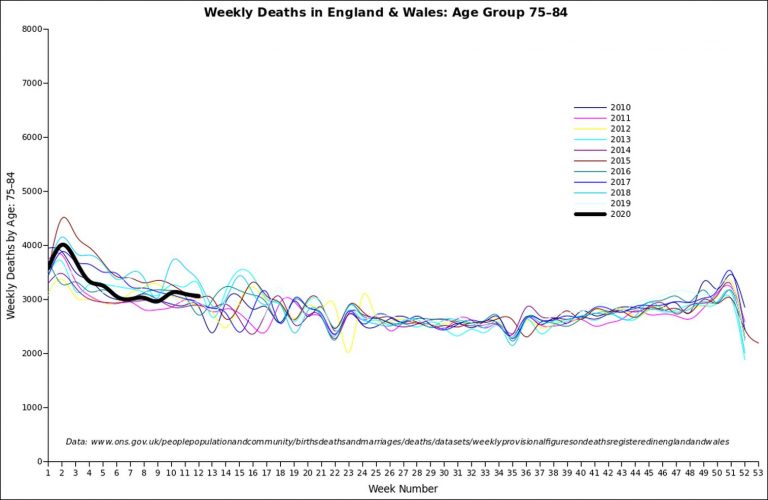 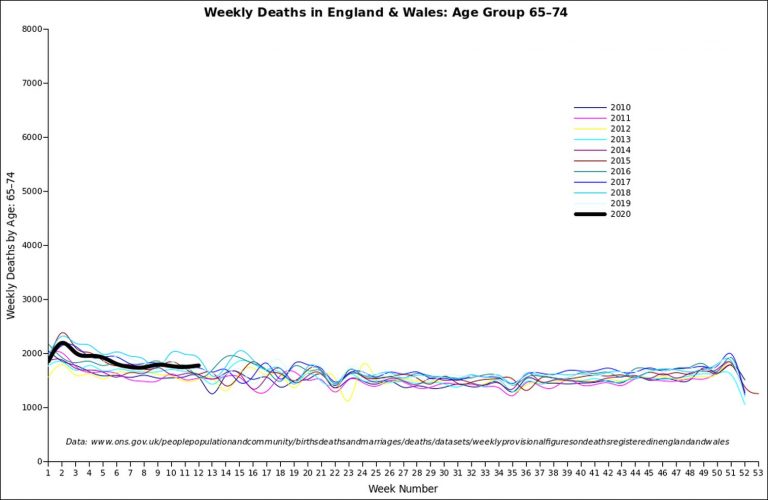 This mass slaughterer of old people is clearly very good at hiding out until the last possible moment, isn’t it?

David says, “The vertical scale is the same for each [graph] so it can be seen how deaths age 85+ are much higher relative to those for the age 75–84, and 65–74. Note also how the deaths of the very old are not only very seasonal but vary significantly year to year according to the severity of the winter season.”

Next up, we have a graph of deaths in England and Wales, stratified by seven age ranges, for 2010-2020. The thick line is the current year. (Click to enlarge.) 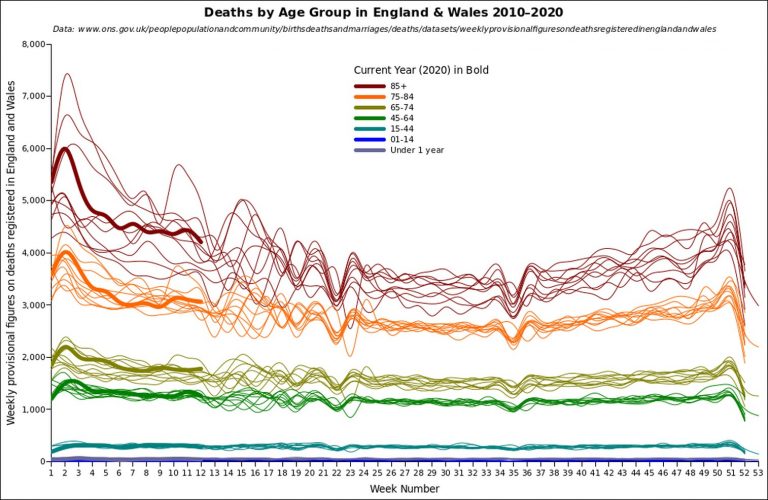 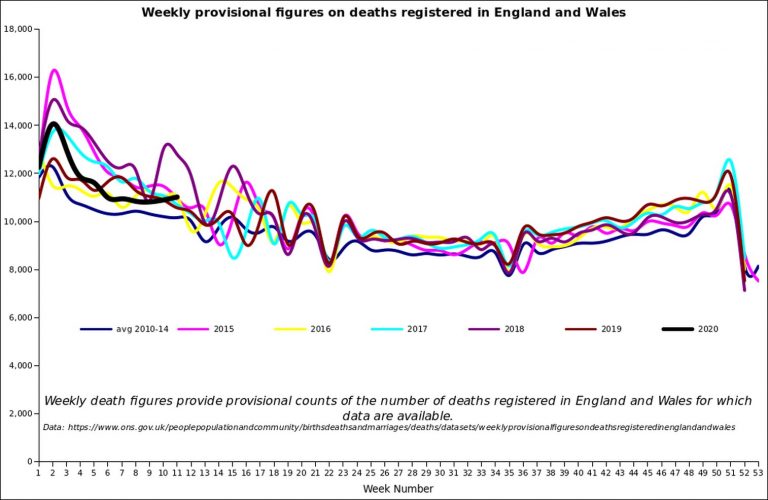 So there is no sign whatsoever of a killer in that data. It’s a perfectly normal year.

But maybe you think we can see it in the respiratory deaths. Especially now that ONS have taken the extremely dubious and desperate step of recording every death of someone who died with Covid-19 as a Covid-19 death, even if there’s no reason to think they died of Covid-19. Covid-19 is a ‘notifiable’ disease (like anthrax), which means that for anyone who died with Covid-19 — even just suspected Covid-19 — that has to be noted on the death certificate. And the ONS has now decided to record any such death as a Covid-19 death. Yes, we’ve become like Italy, with dodgy stats.

There is one possible kind-of-justification for this, and that is that we already suspect that a lot of deaths that were caused at the last moment by flu are not recorded as flu, because if someone, say, has very bad cancer, and they die with the flu, that gets recorded as a cancer death, even though the flu may have been the final cause of death.

This is not, however, something we worry about too much because in a way it would be misleading to record that person’s death as being from flu, seeing as they were probably going to die anyway. We are more interested in looking at how many deaths are caused by underlying conditions like cancer, rather than the flu that was the straw that broke the camel’s back. And also because flu is something that no-one is very worried about. So facts like these have led some people to claim that that flu deaths are, in a way, under-reported.

But this means that we have a double standard here, because when people compare flu deaths to Covid-19 deaths they won’t realise that there were many more deaths that would have been attributed to flu if we had adopted the same standards as we are now doing with Covid-19.

Look now at David’s graph for respiratory deaths in England and Wales for 2015-2020, with the 2010-2014 average in there as well for comparison purposes, and some red dots to indicate the period when the new C-19 death certificate practices were in operation. It’s still nada, zip, zilch. 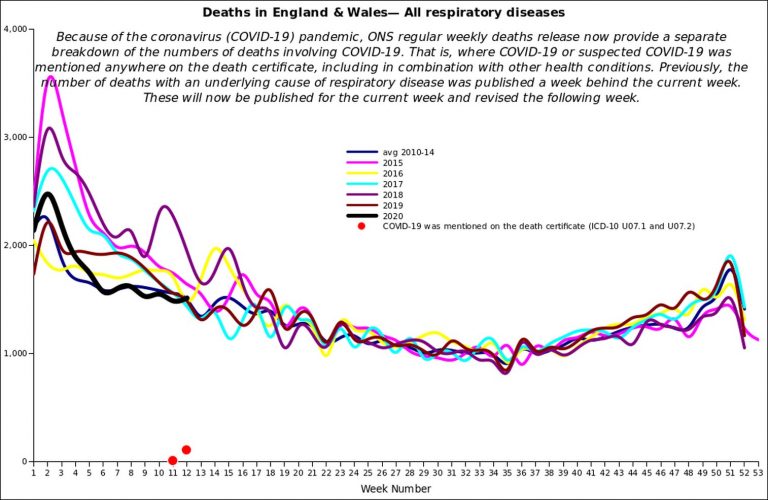 If this monster is about to explode he’s going to do so out of nowhere.

For further perspective, I present Robert Watson’s two updated respiratory graphs. They use the same data as David’s respiratory graph, they just presents it differently. Both are extremely useful ways of taking in the data quickly.

Firstly, we have Robert’s updated graph, with the latest statistics for 2020, graphing respiratory deaths by week in England and Wales vs the prior five-year average. (Click to enlarge. Note that orange line is five-year average, blue line is 2020). 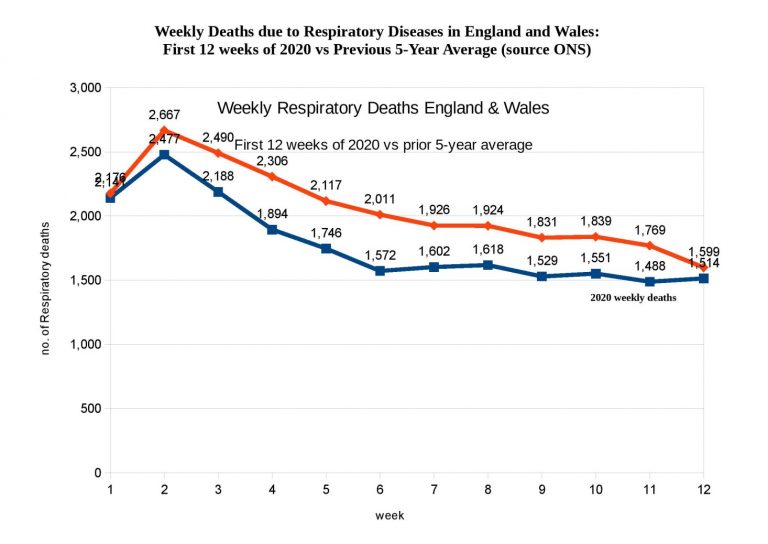 Note that this graph, like David’s, includes the ONS’s changed — increased — figures for Covid-19 deaths for March. If you compare it to the graph he did previously (see my earlier post) you’ll notice that the 2020 respiratory deaths were lower for some weeks in March than on this graph. Now they’re bigger, partly because of the new rules, and partly because some more death certificates have recently come in from private houses and care homes for those periods.

Has this made a big difference? No. Has it made much of a difference at all? No. The Covid-19 numbers just aren’t that big compared to daily deaths, even if we’re just talking about respiratory deaths. As you can see, 2020 has still had less respiratory deaths every week than the five-year average.

And now Robert’s other way of presenting this data. This time it’s the cumulative respiratory death totals for England and Wales, versus the average for the past five years. Cumulative means that we add each week’s figures to the current total, rather than just presenting each week on its own. Again, this includes ONS’s changed (increased) figures for C-19 deaths for March. (Click to enlarge.) 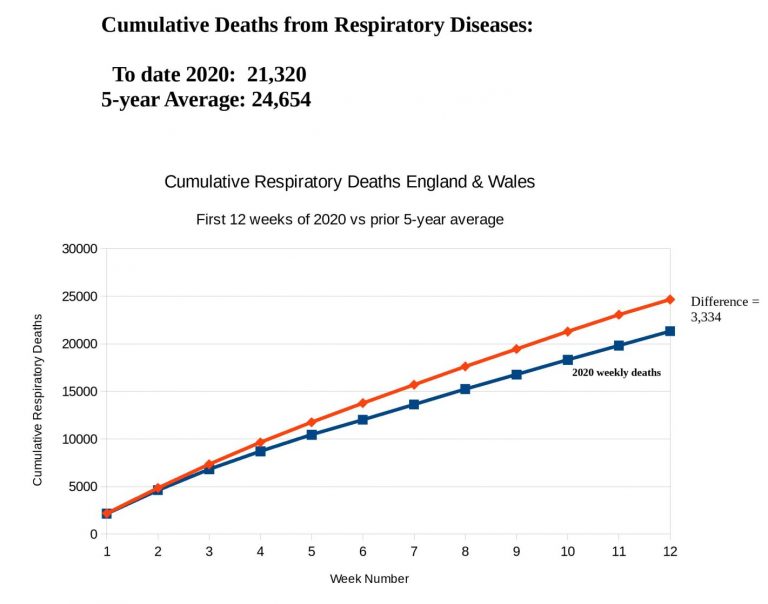 The last graph Robert did of the cumulative deaths had the stats up to the end of week 10. Some people said ‘Wait two weeks, exponential growth, oh my God it’s going to be bad’. Well, these are the stats for two weeks later, and guess what? It ain’t bad. In fact, it’s even better than last time. Despite all those dubious extra Covid-19 deaths they’ve shovelled into the stats, the gap between 2020 and the five-year average actually increased. There were, at the end of week 10, 3004 less respiratory deaths this year than the past five years, but at the end of week 12 there are 3334 less deaths.

We can only conclude that Prof Neil Ferguson is like some trigger-happy Hollywood baddie unloading shells at phantoms in the jungle, and achieving nothing except blowing up unusual clumps of banana trees and a noisy bands of parrots and chimps.

Thanks again to David and Robert for making these graphs. We’re all very grateful to them. But I think their attitude is, it’s no big deal, us pros know how to do these, lots of people can do this sort of thing, so why isn’t the ONS doing it?

Update: Notes from the ONS data:

Weekly death figures provide provisional counts of the number of deaths registered in England and Wales for which data are available, and the number of deaths for which the underlying cause was coded to respiratory diseases as defined in the International Statistical Classification of Diseases and Related Health Problems Tenth Revision (ICD-10). From 31 March 2020 these figures also show the number of deaths involving coronavirus (COVID-19), based on any mention of COVID-19 on the death certificate.

Provisional data on deaths registered in each week (ending on a Friday) are compiled at the end of the following week.

Bank Holidays could affect the number of registrations made within those weeks.

The counts of deaths from specific conditons are updated with each weekly publication as the coding of the underlying cause is not always complete at the time of production.

To meet user needs, we publish very timely but provisional counts of death registrations in England and Wales in our Deaths registered weekly in England and Wales, provisional dataset. These are presented by sex, age group and regions (within England), as well as for Wales as a whole. To allow time for registration and processing, these figures are published 11 days after the week ends.

Because of the coronavirus (COVID-19) pandemic, our regular weekly deaths release now provides a separate breakdown of the numbers of deaths involving COVID-19. That is, where COVID-19 or suspected COVID-19 was mentioned anywhere on the death certificate, including in combination with other health conditions. Previously, the number of deaths with an underlying cause of respiratory disease was published a week behind the current week. These will now be published for the current week and revised the following week. Alongside this, a new bulletin summarises the latest weekly information and will be updated each week during the pandemic. A link to the bulletin can be found in the notice box on the weekly deaths dataset page.

34 thoughts on “Updated graphs of … nothing much”