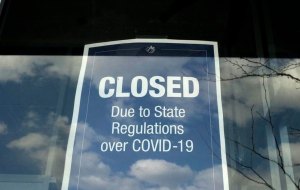 For those people who want the lockdown to continue for a year or so until a vaccine is found, and think the government will just pay the wages of anyone furloughed, bear in mind that currently 6.3 million workers have been furloughed.

Suppose the government pays them £20 000 a year on average. That’s £126 billion a year, almost the same as the whole NHS budget.

If the furloughed numbers doubled, which they probably would do if the lockdown keeps going and going, then we are talking £252 billion a year, almost a third of the total UK government budget for 2019 (which was £821 billion).

And the tax income to even try to pay for all this would drop like a stone. 2018-19 saw £623 billion in tax come in, which wasn’t anywhere near enough to pay for everything the government spent on in that year. You could easily see this tax income halve (or more), as job numbers fall off a cliff, and businesses go bankrupt or fail, and spending drops hugely so VAT income also drops hugely.

We could reduce other government spending to bring this deficit down a bit, but that would make the recent supposed ‘austerity’, which the Guardianistas spent years screaming about, and supposedly killed 140 000 people, look like a hosepipe attached to Scrooge McDuck’s money bin.

Update: In the last four weeks this site has had 135 000 page views, so if you’re wondering about whether it’s worth contributing a piece to Hector Drummond Magazine because you’re not sure whether many people will read it, worry no more, and write that piece. Also, any donations to help this site keep going will be gratefully received.

36 thoughts on “Can we afford to keep the lockdown going until a vaccine is found?”