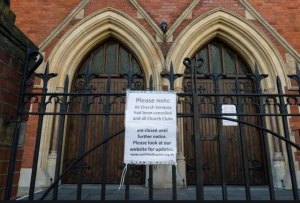 This is an article by Dominey Jenner.

It was hard to get through that last hymn on 15th March having just been told that, because of the impending coronavirus epidemic, our church would no longer be able to meet for the foreseeable future. The enormity of it all, both spiritually and emotionally was like a tidal wave rolling over me.

Fundamental to church is the physical meeting of believers – the word ‘church’ deriving from the Greek ‘ecclesia’ which means ‘assembly’ or ‘gathering’. It is not a New Testament idea; the original church was the assembly of the Israelites in the desert, called forth by the Lord “that I may let them hear my words” (Deut. 4: 10). This God-initiative is not an on-line assembly but rather, a real, physical assembly in a real, physical Creation.

Further, the gathering of God’s people is understood as a blessing. It is a theme that can be traced throughout the Bible: beginning with the micro assembly of Adam and Eve in the bountiful garden of Eden; through the gathering of God’s people at Sinai where they are brought into a precious, covenant relationship with him; through the peace and prosperity afforded Israel as they gathered in Jerusalem under David, their greatest King; until the coming of God’s ultimate Messiah, who opens the way to the ultimate gathering, heaven.

Described in the Bible as “a great multitude that no-one could count, from every nation, tribe, people and language” (Rev. 7: 9), this vision of heaven is one that, for Christians, brings real joy. Personally, when I read those words, I find it hard not to be moved. The local church – the physically gathered local church – is supposed to be a foretaste of that final reality. It is simultaneously intended to encourage believers whilst drawing back the curtain for visitors. It is one of the main reasons I enjoy church so much.

Conversely, it is in scattering that God exercises judgement. Perhaps the most famous scattering relates to the Tower of Babel where men, in their attempt to become gods, have their language confused and are “scattered…over all the earth” in judgement. Or think of the Babylonian Exile.

What better illustration of scattering – in this case God’s own people – as they are carried off by an enemy power. The reason would never have been in doubt. From their very inception as a nation Israel had been warned that, “the LORD will scatter you among all nations, from one end of the earth to the other” (Deut. 28: 64), if they failed to honour him as God. It was with this in mind that I felt a sense of awe on that last Sunday. With that final announcement, we were effectively being scattered. Time to open the book of Lamentations, I thought.

And yet, I felt none of this sense of sorrow or reverent fear from our leaders. The Archbishops of Canterbury and York seemed entirely preoccupied with self image. In an attempt to ‘set a good example’ they squashed the government’s exemptions for clergy and took it upon themselves to ban ministers from even entering their own churches. Did they really believe that a lone minister in a draughty, voluminous building could somehow be part of the chain of transmission? Hence, on Easter Sunday – one of the most significant dates in the church’s calendar – we found our Archbishop delivering his Easter message from his kitchen. The lasting impression of a domesticated man, leading a domesticated church was entirely warranted. Where was the fight? The remonstrating? Where was the conviction? The ecclesiology?

The closure of our own church felt very transactional, as if it were a business – regrettable but unavoidable. The move to on-line, pre-recorded services felt slick and impersonal. From the assembly to exile before the hand sanitiser had even dried. I have read clergy gushing over the numbers logging on to their YouTube services each week. I even heard one clergyman suggest that this represented some kind of revival. Do they not realise that attendance is easy in one’s pyjamas when there’s literally nothing else to do on a Sunday morning? This is not a time to celebrate. It is a time to lament. To not have grasped the spiritual significance of our position is damning.

Is it any wonder then, that churches now find themselves in the bottom category of the government’s proposed strategy to exit lockdown; amongst the least important of all services to our nation? It is a biblical maxim that, ‘a man reaps what he sows’. If bishops had allowed the clergy to at least enter their buildings, would we not now be in a stronger negotiating position for reopening. As with all things Christian, this is a matter of the heart. If there is no real sorrowing for our position; no real passion for our cause; no genuine conviction, then we deserve to be at the bottom of the list.

Over this past week I’ve had emails from a range of businesses detailing the creative, innovative ways they are proposing to make reopening viable. They are pressing to their advantage every government concession available to theme. Sure, they have a bottom line to meet, but there’s also a sense that they are driven by a passion for what they do. Why is the church not doing the same? For most churches, it really wouldn’t be that difficult. As Douglas Murray humorously observed

Church of England services have been practising social-distancing for years.

The only glimmer of light is a pre-action letter, sent last week to the government warning of its “failure to prioritise the re-opening of churches as part of the Government’s ‘exit strategy'”. It is signed by a cross denominational group of 25 Christian leaders. Their rationale speaks of the biblical imperative ‘to gather weekly for worship and witness around the Word of God and sacraments’. Finally, some theology brought to bear. Suffice to say, this challenge to the government does not come with the Church of England’s blessing.

As bad as our political situation is, I believe our moral and spiritual one is worse. Believers often take encouragement from Jesus’ promise that he, personally, will ‘build’ his church. I don’t doubt that, but I’m certain that the Church of England is no longer a means by which this will be achieved. The Church of England has become a self-fulling prophecy. It is time for our Archbishops and bishops to start fighting for the faith they purport to believe and do everything within their power to get churches open again.

8 thoughts on “Dominey Jenner: The Church of England: A Self-Fulfilling Prophecy”