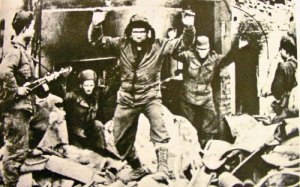 This is an article by Zero HP Lovecraft, who tells me that most of it comes from the work of psychologist Robert B Cialdini, but he has added his own social media moral at the end.

During the Korean War, captured American soldiers found themselves in POW camps run by Chinese Communists. The Chinese treated captives quite differently than their allies, the North Koreans, who favoured savagery and harsh punishment to gain compliance. The Red Chinese engaged in what they called “lenient policy”, which was a sophisticated psychological assault on their captives.

After the war, American psychologists questioned the returning prisoners intensively, because of the unsettling success of the Chinese program. The Chinese were very effective in getting Americans to inform on one another, in contrast to the behaviour of American POWs in WWII. For this reason, escape plans were quickly uncovered and escape attempts themselves were rarely successful. When an escape did occur, the Chinese usually recovered the man easily by offering a mere bag of rice to anyone turning him in. In fact, nearly all American prisoners in the Chinese camps are said to have collaborated with the enemy in one form or another.

How did the Chinese get compliance from the American POWS? These men were trained to provide only name, rank, serial number. Short of torture, how could the captors hope to get such men to give military information, turn in fellow prisoners, or publicly denounce their country?

The Chinese answer was to start small and build. Prisoners were asked to make statements so mildly anti-American or pro-Communist as to seem inconsequential. “The United States is not perfect”. “In a Communist country, unemployment is not a problem”.

Once they complied with these minor requests, the men were pushed to submit to more substantive ones. A man who had agreed that the United States is not perfect might be asked provide examples. He might then be asked to make a list of ‘problems with America’ and sign his name.

Later, he might be asked to read his list in a discussion group with other prisoners. “After all, it’s what you really believe, isn’t it?” Still later he might be asked to write an essay expanding on his list and discussing these problems in greater detail. The Chinese might then use his name and his essay in an anti-American radio broadcast beamed not only to the entire camp, but to other POW camps in North Korea, as well as to American forces in South Korea.

Suddenly he would find himself a ‘collaborator’. Aware that he had written the essay without any threats or coercion, a man would change his image of himself to be consistent with the deed and with the new collaborator label, resulting in more extensive acts of collaboration.

The majority collaborated by doing things which seemed trivial to them but which the Chinese were able to turn to their own advantage. This was particularly effective in eliciting confessions, self-criticism, and information during interrogation. The majority of the men believed the Chinese story that the United States had used germ warfare, and many felt that their own forces had been the initial aggressors in starting the war.

Similar inroads had been made in the political attitudes of the men. Many expressed antipathy toward the Chinese Communists but at the same time praised them for “the fine job they have done in China”. Others stated that “although communism won’t work in America, I think it’s a good thing for Asia”.

Our best evidence of another man’s true feelings and beliefs is their behaviour, not their words. What the Chinese knew is that a man uses this same evidence to know what he himself is like. He observes his behaviour to understand his own beliefs, values, and attitudes.

Writing was one type of confirming action that the Chinese urged incessantly upon their prisoners. It was never enough to listen quietly or even to agree verbally; they were always pushed to write it down as well. Psychologist Edgar Schein describes this tactic:

A further technique was to have the man write out the question and then the [pro-Communist] answer. If he refused to write it voluntarily, he was asked to copy it from the notebooks, which must have seemed like a harmless enough concession.

But, oh, those ‘harmless’ concessions. Seemingly trifling commitments can lead to extraordinary further behaviour. A written declaration is physical evidence of your commitment, leaving no opportunity to forget or to deny what you have done. The irrevocably documented act drives you to make your self-image consistent. We tend to think that a statement reflects the true attitude of the person who made it, even if we know the person did not freely choose to make it. Unless there is strong evidence to the contrary, observers automatically assume that someone who makes a statement means it. Think of the double-barrelled effects on the self-image of a prisoner who wrote a pro-Chinese or anti-American statement. Not only was it a lasting personal reminder of his action, it was also likely to persuade those around him that the statement reflected his actual beliefs.

A similar technique involved political essay contests that were regularly held in camp. The prizes for winning were invariably small – a few cigarettes or a bit of fruit – but were sufficiently scarce that they generated interest from the men.

Usually the winning essays took a pro-Communist stand, but not always. Most prisoners would not want to enter a contest that required writing a Communist tract. So the prize was sometimes given to essays that supported the USA but made small concessions to the Chinese view.

The men participated voluntarily in the contests because they saw that they could win with an essay favourable to their own country. But perhaps without realizing it they began to shade their essays a bit toward communism in order to have a better chance of winning.

The Chinese wanted as many Americans as possible to enter these contests so that, in the process, they might write things favourable to the Communist view.

If, however, the idea was to attract large numbers of entrants, why were the prizes so small? They chose to employ the smaller rewards because they wanted the men to own what they had done. No excuses, no ways out were allowed. A prisoner who salted his political essay with a few anti-American comments could not be permitted to shrug it off as motivated by a big reward.

The big things to understand here are

1) When you see yourself doing something, you change your self-image to include “I am a person who does that thing”.

2) When you think others see you a certain way, the same.

3) You will act in ways that are consistent with your self-image.

So in light of that, please consider how being a user of social media, especially real-name social media, is structurally identical to being a prisoner in a Chinese POW camp during the Korean war.

13 thoughts on “Zero HP Lovecraft: What the Korean War and Chinese Communists from the 1950s can teach us about social media”