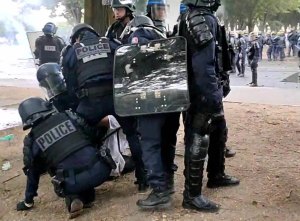 This is an article by Sam Case, a former police officer now working in sport and health.

Large scale public disorder is an interesting phenomena, behaving a bit like pathogens. Nothing for ages then ‘BANG’ up pops an issue to set the streets ablaze.

Shielding takes on a whole new meaning when facing a mob, with a real shield and tactics from the time of the Romans. Your first petrol bomb – glowing rag illuminating the throwers face, masked, not protection against a contagion but worn to frustrate identification. The shout from a colleague, if you’re lucky, a warning before impact, then the heat, searing, instant and all-consuming, your chin tucked down to seal helmet visor against your Nomex overalls, the overpowering smell, petrol vapours and singed hair, then the welcome sight and feel of the extinguisher team literally putting you out. Like all PPE the kit works, sometimes, but you wouldn’t want to live your life in it.

Whatever the cause (even those that have extensive sympathies within the ranks), the face of authority is usually a police line, so naturally they attract the violence. If politicians arrived, waving their statutory instruments, they would become the focal point (from the police and the rioters probably).

Why some people protest and some do not, has been the subject of extensive study. An LSE post from 2015, by academic Jacquelien van Stekelenburg (someone who ‘likes’ a good riot), gives an interesting introduction to the subject, highlighting the need for a grievance, real or perceived, including the concept of relative deprivation – often a third party problem you and your group recognise and have sympathy for.

Research suggests that feeling part of a group which you perceive as deprived is particularly important for engagement in protest.

This third-party connection is advanced like never before, through social media networks and twenty four hour news. Like contagions, the modern transport methods of information can spread globally in real time. No longer languishing on the slow print route, they are turbo charged through fibre optic cables and satellites.

This is a new age for the protest movement: a school girl in Sweden morphs into roadblocks in London complete with pink boat. A policing action in one country leads to the defacement of statues in another. The connection is a narrative, a trending cause that most on the march know little about. Superficial, the micron-thick knowledge of a first-year undergraduate who only ever uses Wikipedia, just enough to join the band and daub the placards with paint.

So I now find myself in a strange position, ready for action, again, ready to join the ranks to fight. Only this time it would be different, I’d be on the other side of the barricade. In opposition to a set of laws and guidance that has and will continue to kill, injure and hamstring millions of innocent victims , of every colour and creed and regardless of your preferred pronoun.

I find myself outraged, a boiling torrent of anger at the damage being done to school kids, to teenagers, the vulnerable old (whatever that means), to the cancer and heart patients who have been forgotten, to the truly poor of this world, no furloughing, no grants, their lives divined from the label sown into my trainers and the memories of trips to foreign lands. Also to the small business owner starring into another empty bottle. I even have sympathy for those who have swallowed every bit of nonsense to be flushed from No10. The muzzle and glove-wearing followers of a novel death-worship cult. Those who make everyday tasks feel like you’re an extra on Casualty (by the time you read this it has probably been expunged from TV history for a minor indiscretion involving a safe space).

Few, if any, of those in power ever experience the sour fruit of their policies. They’ve never been called to a stranger’s home, complete with grieving spouse and sobbing children, for the macabre ‘solo show’. Here you find a victim of despair, a desperate soul, their final ‘self portrait’ painted blood red in the garage, the brush a smoking ten gauge or suspended still and silent from the loft hatch. I have and those images are etched into my brain for eternity. A price you pay for swearing to serve, I’m not complaining, just sharing. Despair can lead to this premature ending, for others the loss of dignity, hope, job, home or social networks spells a decline into ill health, crime, addiction and abuse (perpetrators and victims alike).

How to end this happy little tale? Where do we turn for hope? Maybe we all need to rally to the cause, champion freedoms whenever we can, resist the calls to cancel rather than debate. Attend that controversial lecture, read the stuff that you don’t agree with, question consensus, question your Doctor, always, not just now, question anyone who thinks THE SCIENCE is settled or that science is useless. It is neither. Above all refuse to stay silent, because that is you cancelling yourself.

Now is the time to build the ‘barricades’, to link our shields, to form a line and do our best to hold it, it’s all we can do. We will be attacked, we will get bruised and battered, we will even lose a few along the way but this is a price worth paying because the alternative is truly bleak.

I fear we will soon see more riots and disorder. I do not condone them or wish to see violence and destruction, but I do now understand them a little better, I finally have a cause to protest for.

P.S. Today I walked past a skate park, it was packed. Full of laughter, skill, daring, risk, youth giving a giant middle finger to the new normal. It was a sight that would normally pass me by, an ordinary scene of little relevance, yet today it gave me joy and made me smile, hope revived.