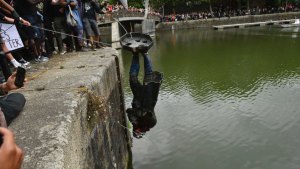 This is an article by Martin Sewell. Martin is a quantitative researcher and developer in the financial industry. He can be contacted on martin@martinsewell.com.

Black Lives Matter. The name itself is certainly a brilliant piece of marketing (Cobley, 2020). It is both a true statement (so difficult to argue against) and consistent with the current hegemony of identity politics (thus ensuring that Western governments, media and academia are all broadly supportive). Plus it is certainly the case that the avoidable death rate for blacks is excessive. In the US in 2018, the homicide rate for blacks was 6.4 times higher than the homicide rate for whites (CDC, 2020).

Where did the movement come from? It is clearly rooted in the American civil rights movement of 1954–1968, during which black Americans fought against legalised racial discrimination, racial segregation and disenfranchisement. Circa 1968 the civil rights movement was co-opted by the political left to help justify a component of their identity politics, which divides society into faux subgroups (Moxon, 2020). One group, white male heterosexuals, supposedly has power over the other groups, ethnic minorities, females and gays. Identity politics manifests itself via its mode of enforcement, political correctness, explicitly via speech codes and hate speech laws, and commonly through gratuitous accusations of racism, sexism and homophobia. Black Lives Matter (BLM) was founded in 2013 in response to the acquittal of George Zimmerman, the man charged with second-degree murder for the shooting of Trayvon Martin. BLM includes elements from both the civil rights movement (black rights) and identity politics (the false assumption that white male heterosexuals are the oppressor). Support surged after the tragic death of George Floyd in May 2020.

Movements that react to events that make headline news can be hugely successful, as they can rely on the media for marketing. Unfortunately, this can lead to overreactions. News, by definition, is unpredictable (otherwise, it would have been reported yesterday). If we cannot predict something, it will be a surprise. So news is surprising. This creates a bias in our understanding of the world, we can end up believing that unusual events are common. If one wishes to analyse a situation with a view to making genuine improvements to the world, a statistical data-driven approach is to be preferred. The marketing can come later.

What exactly does the BLM movement stand for? According to their website they seek to end anti-black racism and state-sanctioned violence against blacks (BLM, 2020). This sounds reasonable. BLM also have a politically correct and feminist agenda. BLM’s ‘What We Believe’ web page considers ‘transgender brothers and sisters’ and ‘Black trans folk, especially Black trans women’, but the only explicit reference to men discriminates against them: ‘[w]e build a space that affirms Black women and is free from sexism, misogyny, and environments in which men are centered.’ The page also states that ‘[w]e disrupt the Western-prescribed nuclear family structure requirement by supporting each other as extended families and “villages” that collectively care for one another, especially our children, to the degree that mothers, parents, and children are comfortable.’ Whilst I believe that people should have the freedom to live as they like so long as they don’t harm others, actively seeking to destroy families and ignoring fathers is surely detrimental to overall social welfare.

It is of course quite natural and reasonable for any group to seek to promote their own interests. But are BLM worthy of support more generally?

Firstly, does a multicultural society exhibit inherent unfair discrimination against blacks, specifically black women? Let us consider the science. For much of human evolution we lived as hunter-gatherer tribes of around 150 people on the African savannah. A man’s tribe formed his in-group, and men would be motivated to ensure the pre-eminence of their in-group. Our minds are thus adapted to thinking in terms of in-group/out-group dynamics. However, note that in-group love dominates out-group hate (Halevy, Bornstein, & Sagiv, 2008). Furthermore, although race is clearly an in-group marker, so too is belonging to a community, nation or university, or supporting a football team, etc.

Now let us consider the two sexes, men and women. Sex likely evolved to eliminate deleterious genetic material from the gene pool (Kondrashov, 1988). Bateman’s principle informs us that in all sexually reproducing species, the relative investment that is made by the male and the female in their offspring determines the degree of discrimination exercised by the individual when selecting a mate (Bateman, 1948). In humans, females give birth to their offspring, whilst males do not, so females can be expected to be the more discriminating sex.

Any local reproducing group has evolved to maximise gene replication (Dawkins, 1976), which involves utilising all or most of the females, but only the highest ranked males. So throughout evolution the highest ranked men had many offspring, whilst the majority had few or no offspring (the distribution of male reproductive success will have a positive skew). Monogamy, in practice, means pair bonding plus clandestine polygyny for the highest ranked men. From a genetic perspective, lower ranked men (the majority of men) are relatively expendable. So in any human society, the most disadvantaged subgroup will be men of lower rank in the dominance hierarchy (Moxon, 2012).

The theory informs us that most discrimination is aimed at men, rather than women. Now let us consider the empirical evidence. Eagly, Mladinic, and Otto (1991) conducted an experiment with male and female respondents by means of a questionnaire that measured their attitudes, beliefs and emotions vis-à-vis men and women. They concluded that women were evaluated more favourably than men. Riach and Rich (2006) made bogus job applications for various vacancies in central London that were identical except for the sex of the applicant. The positions applied for were engineer, computer analyst programmer, chartered accountant and secretary. Men were discriminated against twice as often as women. Dunham, Baron, and Banaji (2016) examined gender attitudes, such as the association of males and females with the attributes ‘good’ and ‘bad’, using the Implicit Association Test and via self-reporting. The results of both the implicit and explicit tests showed that both men and women evaluated females more positively than males. Moxon (2018) reviewed the literature on misogyny, and concluded that that the evidence better supported its antithesis: philogyny and misandry. Whilst the Crown Prosecution Service recorded victims of hate crime during the year 2018–19 as (among cases where sex was recorded) 61.5% male and 38.5% female (CPS, 2019).

The most negative attitudes tend to be towards men who are different (Moxon, 2019). Although sex is binary, black men exhibit stronger male characteristics (e.g. higher levels of testosterone (Ross et al., 1986)) than men from other races. From a non-black perspective, black could be a proxy for difference. Race can prompt the salience of sex and difference. In short, black men, rather than black women, are likely to be subject to discrimination, but primarily because they are men, not because they are black.

Secondly, is there evidence of significant state-sanctioned violence against blacks? Menifield, Shin, and Strother (2019) analysed a data set of all confirmed uses of lethal force by police officers in the US in 2014 and 2015. They found that white officers appear to be no more likely to use lethal force against minorities than non-white officers. Fryer (2019) compiled and analysed a data set on officer-involved shootings from ten locations across the US. He concluded that there were no racial differences in officer-involved shootings. Johnson, Tress, Burkel, Taylor, and Cesario (2019) created a database of all fatal officer-involved shootings in the US in 2015. They found no overall evidence of anti-black disparities in fatal shootings, whilst a 2019 review of the literature concluded that there was no anti-black bias in police shootings (Ideas and Data, 2019). In short, there is no significant evidence of state-sanctioned violence that unfairly discriminates against blacks. Note that in the US, from 1980 to 2008, 93% of black homicide victims were killed by blacks (Cooper & Smith, 2011).

Note that I have taken BLM’s goals as stated on their website at face value. In practice, BLM has presented an irresistible opportunity for virtue signalling for many and facilitated civil disobedience for a few (though I don’t doubt that the majority of supporters have the best intentions). Black Lives Matter UK’s GoFundMe web page states that they are ‘guided by a commitment to dismantle imperialism, capitalism, white-supremacy, patriarchy and the state structures that disproportionately harm black people in Britain and around the world’ (UKBLM, 2020).

On 7 June 2020 in Bristol, a bronze statue of Edward Colston (an English merchant and philanthropist involved in the slave trade) was pulled down, defaced and pushed into Bristol Harbour by BLM protesters. This was despite the fact that, according to the last known poll before the event, the majority wanted the statue to stay (Gallagher, 2014). Globally, the region with the most slavery is Africa, with 0.76% of the population enslaved (GSI, 2018). However,

political correctness dictates that it is acceptable to criticise whites, but not blacks, even if this means focussing on the past (about which we can do nothing), rather than the present and future (which we have the ability to change).

To conclude, BLM believe that the primary victims of discrimination are black women, when they are more likely to be lower ranked men. BLM apparently also believe that the primary perpetrator of violence against blacks is the state, when it is blacks. In other words, Black Lives Matter misidentify both the victims and the perpetrators. Which is a shame, because black lives matter.

Cobley, B. (2020, June). Black Lives Matter: How should we respond? Retrieved from https://sdp.org.uk/sdptalk/black-lives-matter-how-should-we-respond/ (SDPtalk, 10 June 2020)

Gallagher, P. (2014, June). Bristol torn apart over statue of Edward Colston: But is this a figure of shame or a necessary monument to the history of slavery? The Independent. Retrieved from https://www.independent.co.uk/news/uk/home-news/bristol-torn-apart-over-statue-of-edward-colston-but-is-this-a-figure-of-shame-or-a-necessary-9555333.html (22 June 2014)

Kondrashov, A. S. (1988, December). Deleterious mutations and the evolution of sexual reproduction.

Moxon, S. (2012). The origin of the sexual divide in the ‘genetic filter’ function: Male disadvantage and why it is not perceived. New Male Studies: An International Journal, 1 (3), 96–124. Retrieved from http://www.newmalestudies.com/OJS/index.php/nms/article/view/47

Moxon, S. (2018). Misogyny has no scientific basis of any kind: The evidence is of philogyny – and misandry. New Male Studies, 7 (2), 26–42. Retrieved from http://www.newmalestudies.com/OJS/index.php/nms/article/view/282

Moxon, S. (2020). The origin of ‘identity politics’ & ‘political correctness’ not consideration for minorities but hatred towards the mass of ordinary people; specifically ‘the workers’ – tracing the roots of why and how it arose and developed reveals the greatest political fraud in history. Retrieved from https://stevemoxon.co.uk/identity-politics-and-political-correctness-origin-pc-hatred-the-workers/ (stevemoxon.co.uk, originally published in 2014)