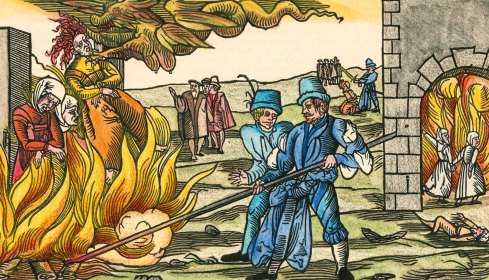 I have always smiled when I used to hear people laugh at the folly of previous generations and those who lived a long time ago. How foolish were our ancestors in what they believed and in what they did ? Whether it was exchanging houses for tulip bulbs, bleeding people with leeches or burning witches. We now know better. But somewhere in the back of my mind I always wondered if we had really evolved to a higher plane of thinking and interaction to avoid such stupidity. I think I always doubted it. Maybe it was things I learnt in school, like how evolution doesn’t work that quickly. Or maybe a natural appreciation for someone like Einstein who could say: “There are two things which I think may be infinite. The Universe and human stupidity. But I’m not sure about the Universe.” How brilliant is that quote!

But my fears have been fully realised by the events of 2020. It appears that human stupidity in the 21st century knows no bounds, and the mass stampede off the cliff that we have all made, with very few exceptions, is a testament to the validity of my concern. I don’t need to describe the absurdity of the world in August 2020, because one just has to open a newspaper to read about the catastrophic damage that has been done by our actions. Totally self-inflicted. All of this has been in response to a fear of death from a viral epidemic which did indeed kill some people, as is usual with viral epidemics. But not many, and the rest of us have survived with a survival rate somewhere between 99.9% and 99.99% depending on demographics, how deaths have been counted (or miscounted), and how effectively we managed to shield the truly vulnerable. But in summary pretty much every country has a survival rate well north of 99.9%.

What on earth were we thinking ? Or was it just a case of just not thinking ? At an individual level, of course there were good analyses and examples of critical thought, but the great learning from the last four months is how society can throw rational behaviour out of the window and, in a fit of hysterical panic, just run around like headless chickens. I have three examples of choice.

Firstly, our complete inability to put actual data about the virus into any kind of context. Quite simply, numerical illiteracy. There is the total lack of awareness about the ‘normal’ number of deaths in any year, month or week. Over 600,000 people die in the UK every year, and this is entirely normal! Thank God, because without this wonderful natural feature of our time-bound existence, life would quite simply not be worth living. We die from everything, mainly cardiovascular issues (eg. heart attacks and strokes) and cancers, but also a host of other undesirable conditions, and even just old age. In the UK, at a rate of about 1600 per day. We never hear this on the news. We never hear it said that thirty people died from Covid, but this was actually only around 2% of the daily death count. And a slight pause for thought would lead to other observations: such as that if 40,000 people in the UK have died from this virus, then it means 99.94% of us have survived. Or how if we take the gigantic step of looking at the age breakdowns which can be accessed with three clicks from the website of the Office of National Statistics, over 90% of the deaths are from people over 60. And almost all of these people also had serious other diseases. Most of us take far more risk getting into a car, and yet huge numbers of young and middle aged people were genuinely worried for their health. And still are. What were we thinking?

Secondly, the way we almost point blank refused to allow any thought or discussion to be made about equivalences between ‘lives’ and ‘livelihoods’. Everyone wanted to save lives (“what if it was your granny?”), but no one seemed able to think about how much saving those lives would cost. It was like the sight of the oncoming tsunami of unemployment, impoverishment, additional deaths due to untreated cancers, and the general deleterious effects of a huge recession were going to happen to somebody else. It was if we just said, “Thanks Rishi, for the free food, now let’s watch some fake footie”. Crikey, we are not a nation of five year olds. What were we thinking?

And thirdly, our total inability to see that the lockdown was not a solution, just a delay of the problem. Even Boris told us: we must lockdown to “flatten the curve”. But you don’t have to be a rocket scientist to see beyond this brilliantly flawed strategy what the problem is. As soon as you release the lockdown, you just revive the problem you were trying to solve. Because it wasn’t a solution, just a delay. And worse, once you have locked down it becomes difficult to admit it was a mistake because, through your own sacrifice, you are now emotionally invested in the enterprise. This is known as the sunk-cost fallacy. I look around the world in amazement and see how everyone was just totally blind to this obvious issue. It’s like a giant psychotic Ponzi scheme, with the hugely sad and final outcome that it will crash. Just look at Australia and New Zealand if you want to watch this tragedy unfold in slow motion. Every attempt to release themselves results in a resurgence of the problem, and, unlike European countries, the problem hasn’t even really started there, so they still have it all to come. It is genuinely tragic to watch these once proud and free nations implode. What on earth were they thinking?

Of course, there are many who will point out that we didn’t have the data in March, that we might have overwhelmed ICU capacity, etc. And our response back then could be forgiven, if we had just stuck to the original rationale. But by mid-April it was clear we had over-reacted and we should have changed track. We didn’t. We doubled down, moved the goal posts and four months later this is where we are. Future generations will look back and remark on the illogicalities, the inability to mentally execute simple trade-offs, and the staggering numerical illiteracy of the people of the world in the early 21st century. For all our technological and intellectual prowess, we are no better than those who used to burn witches because the harvest failed.