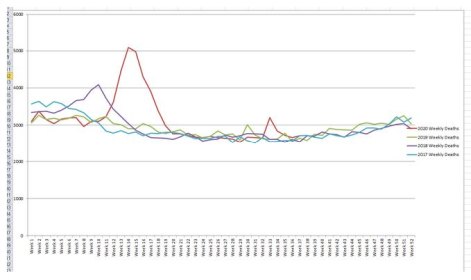 Reader Tom Walsh has sent me a graph of Dutch deaths for 2020, set against previous years (click to enlarge): 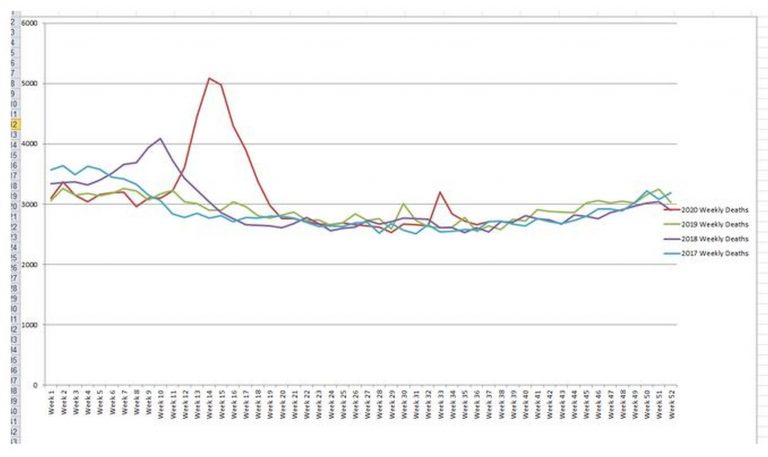 He got the numbers from here.

You can see that there was a spring spike, but it wasn’t that much worse  than the slightly earlier spike in 2018.

Tom tells me that up to week 37 the excess deaths compared to 2018 (the worst of recent years) is only 5500. Even if we assume that difference stays intact until the end of the year it’s only about one-thirtieth of the normal yearly death toll in the Netherland, which is usually around 150,000 (153,363 in 2018), that is, less than two weeks extra mortality. 2018 itself was 3,149 deaths more than 2017, and nobody thought that meant World War III.

As elsewhere, it was mostly the elderly who died, Tom says that 87% of deaths were in the over-65 category.

Another very interesting fact is that the Netherlands has actually had less excess deaths than Covid deaths. There have been 6454 Covid deaths so far, but only 5500 excess deaths. Contrast this with the UK where excess deaths far exceed Covid deaths. This is remarkable, as it suggests that the Netherlands, where the government didn’t take a frighten-the-pants-off-the-people approach, and which doesn’t have the same scaremongering media as Britain, has seen enormously less lockdown deaths than the UK (in fact, possibly none at all). Frightening sick people from going to hospital and isolating elderly care home residents with dementia are killer policies.

(Of course, one cannot be completely confident about this due to the fact that Covid death numbers are unreliable, and there may be differences in counting between the countries; then again, we have very good reason to believe that the Covid deaths in the UK are being over-counted, so if anything the number of UK lockdown deaths have been underestimated, which makes the comparison between the two countries even more extreme. Also, Covid deaths in the Netherlands have been much lower per head of population than the UK, so the Netherlands figures are unlikely to have been inflated to the extent they probably were in the UK.)

Finally, before you attribute the non-event that was Covid-19 in the Netherlands in 2020 to a strict lockdown, bear in mind that the country did not have any such thing:

When coronavirus first hit the Netherlands in March, the country did not impose a full-blown lockdown like France or Italy. Instead, it kept stores open and allowed residents to leave their homes freely, opting only to close face-to-face businesses like restaurants and hairdressers. This “intelligent lockdown” system, which mirrored Sweden’s controversial strategy, was designed to build up immunity to the virus among younger and less vulnerable residents. The Netherlands ultimately saw more per capita Covid-19 infections than some of its neighbors over the spring, but the country began reopening restaurants and schools when the virus began to subside in May.

I would rather have lived in Sweden in 2020, but Netherlands was also a better place to live than Britain.

Update: Tom mails me to say:

Our version of Fauci here is an “Ab Oosterhaus” He ordered 700 million Euro’s of vaccines in 2009 which were never used and were eventually destroyed ( https://en.wikipedia.org/wiki/Ab_Osterhaus). I can remember that there was an egg shortage here as a result. He is of course still a top advisor to our gormless PM. Does that sound familiar?

Update 2: Please support this website by donating via KoFi, subscribing via SubscribeStar or Patreon, or buying my book (see right-hand sidebar for links). Independent media like Hector Drummond Magazine, and my constantly updated Twitter and Parler accounts, cannot survive without your support.

5 thoughts on “What the Netherlands tells us”