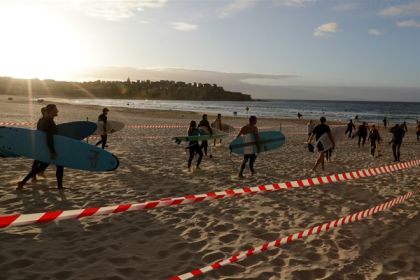 This article is based on a link and some notes Jeremy Harris sent to me. I’ve written my own analysis, but it’s pretty much the same (as far as I can tell) as Jeremy’s own thoughts.

Actuary analysis shows that New Zealand’s all-cause death figures have dropped in 2020, by around a tenth. (If we look at the proportion of the population who die each year there’s been a drop of roughly a tenth of one percent). Here’s some graphs to demonstrate (click to enlarge). 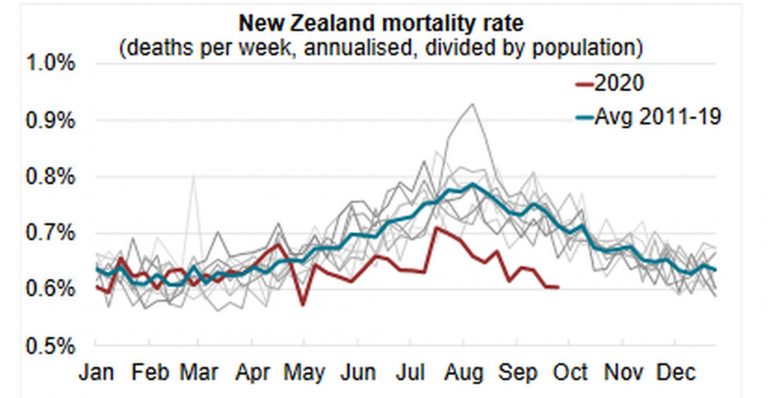 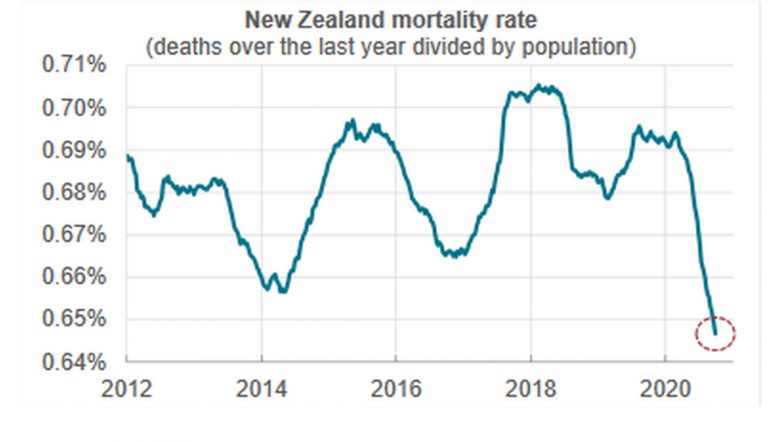 Young people aren’t affected at all, though, and the middle-aged only slightly. The impact has been almost exclusively on the elderly, and the higher the age group, the more the effect. 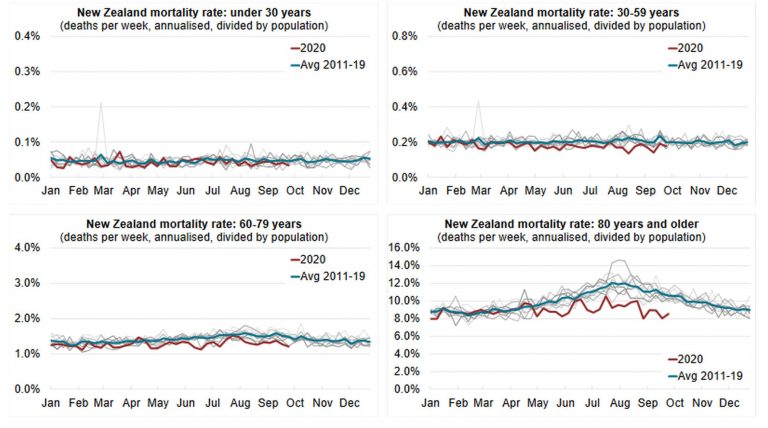 This drop is likely due to New Zealand closing the borders rather than lockdown, because (a) NZ relied on border closures more than lockdowns, and (b) countries with lockdowns didn’t see this happen (and lockdowns can kill extra people if they’re too aggressive).

We already know that in normal times a lot of elderly deaths are caused by viruses which aren’t very dangerous to most people finishing off some people already near death. Generally such people are either too frail to cope with a virus (frailty is the biggest predictor of Covid death, for eg), and/or they have immunosenescence. So probably some of these sorts of viruses (influenza, for example) come from international travellers bringing it back with them into the country.

So closing your borders and requiring long quarantines for those allowed in does prevent viruses from getting into your country. (Not a surprise, we’ve always known that international travel spreads disease.) So it may give a few elderly people near death a bit longer to live, which is good.

But that also means you’re building up an unprecedented stock of ‘dry tinder’ (for want of a better term) who will, soon after you open the borders, get sick when a load of new viruses flood in, overwhelm the hospitals, and die off quickly and in number.

And if you don’t open the borders most of these people will still die before too long anyway, as they are near end-of-life now.

So you’ll have a similar mortality over, say, a five-year period. But in the meantime you’ll have smashed your country’s GDP, imprisoned your population, and given the state a massive expansion of powers.

That doesn’t sound like a good deal to me. It’s not that I’m opposed to strict border controls; in fact, I’m quite happy with the idea of reasonably strict border controls in general. But not that sort of medical/quarantine border. Nor am I a fan of turning your country into medical fascist state that freaks out over what is, at the public health level, a fairly mild disease. That isn’t psychologically healthy, and it’s pointless when you look at the difference it’s making.

Update: Someone on Twitter said that there had been a glut of deaths in the over-70s in New Zealand in the last three years, so I thought I should check out the country’s recent death figures.

Here’s a graph of all-cause mortality done with data from here and here (the latter for the 2019 number). 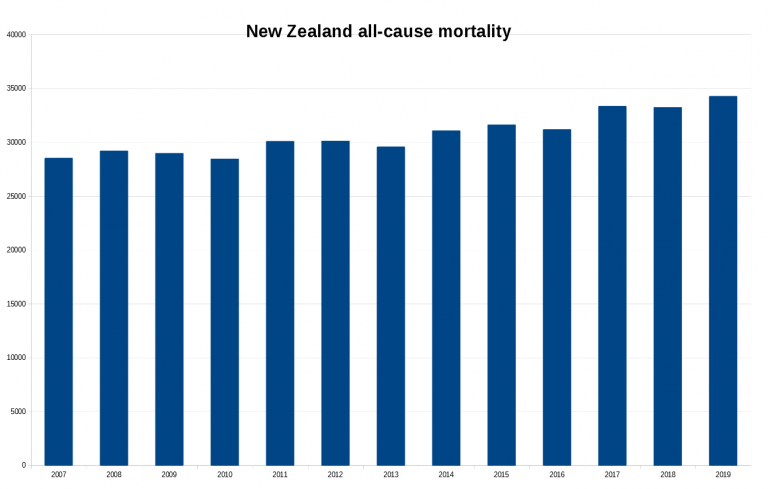 From this it does look like 2017, 2018 and 2019 had excess mortality. But when I used New Zealand’s population numbers to do a death rate per 1000 it could be seen that in fact those years were normal. 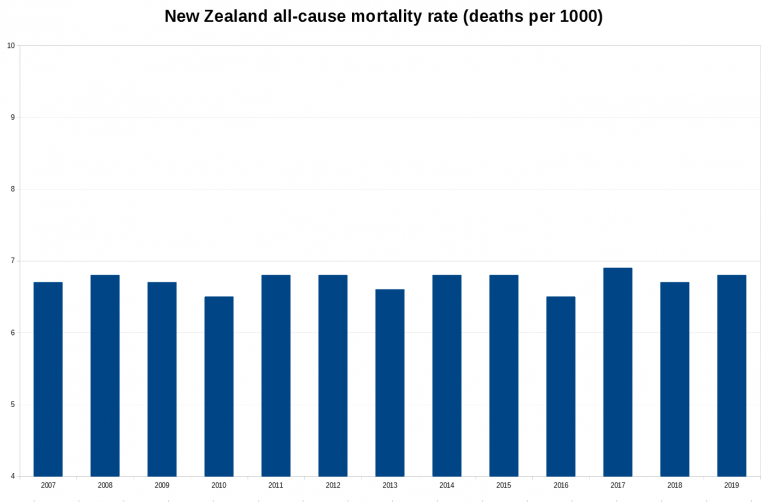 But what about the over-70s? I couldn’t locate those specific figures. On the one hand one may take the view that as most deaths are invariably of the over-70s then probably the situation with them in recent years is similar. On the other hand, one might take the view that as there has been a bit of an increase in the rate of population growth in the last five years (as can be seen from the graph below) then we would expect less of this increase to have filtered through into the over-70s at this point, so the increased number of deaths (which is mostly going to be over-70s, because it always is mostly them) does indicate that more over-70s than usual have died. I don’t have the numbers to decide this.

Update 2: Jeremy has been touch to add some further thoughts (never trust anyone with pink hair, I say).

This likely means that NZ is going to have multiple competing epidemics of varying severity when we open, or should I say “if”, as I think “if” is now a possibility. For example, this moron – who has been the “expert” talking most to the media – is now saying a vaccine won’t be effective, so we basically have to stay closed forever. I don’t understand how these people can be called scientists.

Anyway when we open these competing epidemics are likely to be severe, with or without a vaccine, and far worse than if we had just followed our pandemic plan (i.e. Sweden) in March. $140 billion dollars (50% of GDP), civil liberties crushed and millions of years of life lost via economic harm affecting public health to make the situation worse.

At yet the general public is engaged in rousing bouts of back-slapping one other and denigrating the rest of the world. Pride goeth before the fall.