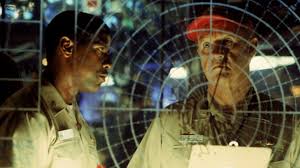 This is an article by Andrew Mahon. Andrew is a writer based in London, who has written for the Spectator, the Daily Wire, Human Life Review, New English Review, Brexit Central, Catholic Journal, Conservative Woman and others.

The 12th of May this year marks the 25th anniversary of the 1995 underwater thriller Crimson Tide, directed by Tony Scott. It stands up a quarter of a century later as a claustrophobic, tension-filled testosterone fest, with an almost entirely male cast and some memorable Grammy award-winning tunes by Hans Zimmer. It is essential lockdown viewing, and not only because life on a nuclear submarine is kind of like self-isolation.

The premise of the film is the threat of a nuclear attack on America by a Russian dissident who has taken control of Russia’s nuclear missiles during a post-Soviet era civil war. Gene Hackman plays hardass sonofabitch Captain Ramsey of the USS Alabama, a nuclear submarine assigned to provide pre-emptive strike capability in case the situation deteriorates. And deteriorate it does. An Emergency Action Message (EAM) containing an order to launch nuclear missiles is received by the Alabama and authenticated shortly before an enemy submarine engages the Alabama in an underwater dogfight. A second, partial EAM is received just as the Alabama loses communications capability. It is impossible to authenticate this message or determine its content. It could be an order countermanding the earlier order to launch, or it could be an order altering the target or expanding the scope of the attack, or it could be a fake Russian transmission. It could be anything, and therefore, in Ramsey’s eyes, it’s nothing.

Ramsey wants to proceed based on his most recent authenticated orders and launch the nuclear weapons. If they don’t, he reasons, the dissident Russians may launch first, attacking American cities and starting a nuclear war. His Executive Officer, the more cerebral and conscientious Lieutenant Commander Hunter, played by Denzel Washington, insists that they wait and repair the radio in order to receive the full transmission before launching, reasoning that if the partial EAM proves to be a revocation of the launch order, the Alabama would be needlessly starting a nuclear war by proceeding. This initial tension between the two escalates mimetically, forcing the rest of the crew to take sides, and leading to a pressure cooker of mutiny and civil war within the confines of the USS Alabama.

The formula is as follows: a real but perhaps exaggerated crisis demands a response, but the information upon which decisive action can be justified is incomplete, so the dilemma becomes either to take action based on incomplete information, which may be premature, or to delay that action in favour of seeking out more information, which could come too late. Delaying action may mean catastrophe, but on the other taking action too quickly may mean a wholly different catastrophe.

In the current coronavirus lockdown this basic formula has just unfolded globally, although very little time was spent on the dilemma before Gene Hackman got his way in almost every country in the Western world. Coronavirus poses a crisis to be sure, but it is and has been exaggerated. The chosen response of lockdown — admittedly not quite a nuclear holocaust — has been based on the worst case predictions, notably those out of Imperial College London, which Nobel Prize-winning biologist Professor Michael Levitt of Stanford has claimed were off by a factor of ten. Other scientists, including those out of Stanford and Oxford Universities offered alternative findings, all of which ought to have been taken together to yield a comprehensive assessment of the threat. But instead most governments have ignored Denzel Washington’s caution, taking instead the incomplete and unreliable apocalyptic modelling as the justification for a premature and disproportionate lockdown.

There’s growing evidence to suggest that the lockdown itself might cause more deaths than the coronavirus. Unemployment is up massively, suicide rates are rising alongside, domestic abuse is increasing, and many patients — notably cancer and cardiology — aren’t receiving treatment for anything other than Covid-19. This is not to say doing nothing is a solution. Responding to an epidemic doesn’t present the same black and white dichotomy as the decision to launch nuclear missiles. There are countless measures in between locking down and doing nothing that might be effective without causing serious economic damage. And this makes western governments’ Gene Hackman approach even less defensible than in the film. It’s difficult to say what might have been had we not locked down, but we can look to Sweden, the one western country where Denzel’s prudence has prevailed. Sweden hasn’t done nothing — they’ve simply implemented less stringent social distancing measures, while keeping children in school and allowing the economy to continue to function, albeit at a slowed pace.

The scientists upon whose work such government decisions rely are no doubt experts in their fields. As is Gene Hackman in his field of submarine warfare — Captain Ramsey is one of the few US Naval officers left with combat experience. But in critical decisions with such far-reaching implications, what’s required more than expertise in a narrow discipline is wisdom. It’s no coincidence that Denzel Washington’s character is more philosophical than his captain (‘war is the true enemy’ he tells an unconvinced Ramsey). Simply put, the decision to rely on a particular expertise cannot be made by that same expertise — a broader perspective is needed. Politicians, being decision makers, need to be more philosopher than scientist, more Hunter than Ramsey. But regrettably, in the words of former UK Supreme Court Justice Jonathan Sumption, our politicians are ‘sheltering behind the scientists’ which is ‘an evasion of political responsibility.’

Crimson Tide attempts to portray both positions fairly, but the audience is clearly expected to side with Denzel Washington. As a teenager in the nineties this seemed so obvious to me as to make the film’s premise appear rather weak. But the coronavirus has revealed the vast majority of us to be on Gene Hackman’s side, in support of a knee jerk reaction to an exaggerated crisis, without the ability to assess the true threat, failing to consider the consequences of the response. Today, I endorse the film as a prescient and accurate portrayal of human nature in a crisis, with the caveat that, in the real world, it’s become apparent that Denzel Washingtons are in extremely short supply.