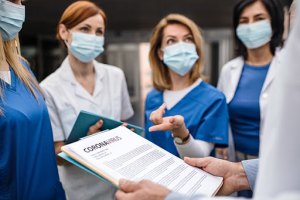 This is an article by Thaddeus Michaels (not his real name), who is a data scientist.

Neil Ferguson’s critics see him as a doom-monger, whose death forecasts have far exceeded reality.

His defenders tend to counter with two points. First, that his models made the best of the available data at the time. Second, that regardless of the accuracy of the models, they broadly had the desired effect of spurring the government into action.

The first point has been picked over relentlessly over the past few months, but the second point tends to go unchallenged. Does it hold up? Here are some obvious problems with it:

If we tell a doctor that Patient X has a 7% chance of dying from Covid-19 in the next 3 months, and only a 2% chance of dying of cancer, which disease will be that doctor’s priority? Overly pessimistic projections of Covid-19 fatality undermine treatment for other conditions.

The big flaw in the ‘better safe than sorry’ position on Covid-19 is that it completely ignores emerging evidence that people are dying of other conditions: cancer, mental illness, addiction, and many others that benefit from early intervention and regular medical attention.

Getting the probabilities right matters, and errors in either direction can be damaging to health outcomes. Of course we have to accept that with a novel disease outbreak, these probabilities will be ranges with wide confidence intervals. Nobody is expecting epidemic modellers to get things exactly right, but that uncertainty must be communicated well to non-specialists.

2. Healthcare policymakers must prioritise who is treated

The big fear at the start of the Covid-19 epidemic was that UK hospitals (and specifically ICUs) would be overwhelmed. This drove policymakers to find ways of keeping people out of hospital (‘Protect the NHS’).

Some of the measures intended to ‘Protect the NHS’ were sensible and well-evidenced: encouraging hand washing, building additional capacity, sourcing emergency PPE supplies for medics, and so on. Hard to argue with any of that, despite flaws in the implementation.

Other measures, though, were underpinned by Ferguson’s idea that the NHS would almost certainly overshoot capacity, and that therefore the government would have to prioritise which patients merited the most urgent treatment.

The very high projected numbers of healthy working-age individuals hospitalised by Covid-19 forced the government to look for ways of protecting capacity for those groups.

Did this consequently lead to the catastrophic policy of sending elderly Covid-19 infected patients back to care homes? We cannot be sure at the moment, but the anecdotal information from doctors assigned to care homes is that many patients who could have been saved have been left to die as a result of this policy, whilst also infecting other care home residents and care workers.

And yet the Nightingale hospitals were empty! What logical explanation is there for this besides the overly pessimistic modelling forcing policymakers to make a deadly trade-off?

3. The public and media reaction is informed by ‘the science’

It is widely claimed that lockdown or no lockdown, behaviour would have changed and the economy would have suffered because of the self-organising public reaction to Covid-19.

But why did the public react the way they did? Was it the news out of China and Italy? Was it because they had direct experience of the disease ravaging through their local communities? Or was it because the media faithfully reported Ferguson’s projections that over half a million people might die in the UK alone?

We will never know exactly why – and there is unlikely to be a single explanation – but clearly the public react to the information they’re given by experts. Indeed, this kind of feedback loop is one of the biggest challenges with modelling human behaviour at the macro level.

There is now emerging evidence that people are delaying seeking treatment for very urgent medical conditions such as strokes and heart attacks. This is what happens when you convince people that they are more at risk from potentially catching a virus with a <1% fatality rate than currently experiencing a catastrophic heart failure.

So we have to conclude: pessimistic projections can take lives.

23 thoughts on “Thaddeus Michaels: My criticisms of Ferguson”