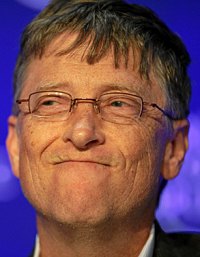 I came across this 2016 Guardian article pushing a report that said “ultra-rich” philanthropists, in particular Bill Gates, are using their money to set their own agendas in poor countries and undermining governments and UN and its agencies.

Ultra-rich philanthropists and their foundations have increasing influence on decision-making and are setting the global health and agriculture agenda in developing countries, according to a major study (pdf).

Using their immense wealth and influence with political and scientific elites, organisations like the Bill and Melinda Gates Foundation, the Rockefeller Foundation and others are promoting solutions to global problems that may undermine the UN and other international organisations, says the report by the independent Global Policy Forum, which monitors the work of UN bodies and global policymaking.

Okay, so Bill is bad and uses his money to buy influence and change things to how he wants. Got it. Very Guardian.

This story came from a Guardian sub-section called ‘Global Development‘.

But then I came across this 2010 Guardian story about how the Guardian has started up this new ‘Global Development’ site in partnership with… the Bill and Melinda Gates Foundation.

The Guardian today has launched a new website in partnership with the Bill & Melinda Gates Foundation to help focus the world’s attention on global development.

Perhaps the Guardian has reconsidered this sponsorship in the light of that critical story? It appears not. When you click on the ‘About this content’ on the Global Development page you get taken to a page which is headlined ‘About this site’. And that says that the site is is partly funded by one entity: the Bill and Melinda Gates Foundation.

That content is dated 2011, but presumably the sponsorship is still going, otherwise that page would be have been taken down, right? (Unless the Guardian is incapable of even updating its own site.)

So I did some more digging, and discovered this Guardian story from late 2018 which reports that Gates is still funding the Guardian’s Global Development page, which is well after the critical story of 2016 came out.

So the Guardian takes money from the very man who was said to be, in a report that they pushed, ‘skewing priorities’ by ‘promoting solutions to global problems that may undermine the UN and other international organisations’. The report also questioned ‘why the Gates foundation invests heavily in companies like Monsanto and Bayer’, and suggested the real aim was to open African markets to US agribusiness. This is all very Guardian, but it seems that the Guardian’s board wasn’t convinced.