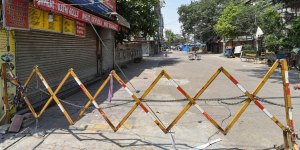 Someone has made good spot with this paper, and has let me know. It’s called ‘When to release the lockdown: A wellbeing framework for analysing costs and benefits‘, and the lead author is Professor Richard Layard, an extremely distinguished economist at the LSE. It was published in April 2020 by the LSE’s Centre for Economic Performance.

If the lockdown ends on 1 May in the manner described earlier, the UK would experience some 150,000 deaths from COVID-19, mostly in a second wave occurring before a regime of testing and tracing can be put in place.

The paper itself is quite shocking. Consider the very first page. When comparing the positives and negatives of lifting lockdown, the authors first of all provide this list of things that would be positive about lifting the lockdown:

On the positive side, releasing the lockdown

(1) increases people’s incomes now and in the future.

(2) reduces unemployment now and in the future.

(4) maintains confidence in the government.

They have, as one of their five important things about lifting the lockdown, that it would ‘increase confidence in the government’, but NOTHING ABOUT AT ALL ABOUT RESTORING BASIC FREEDOMS. Are you kidding me?

Then, in their list of negative things about lifting lockdown, they have this (this is all they had, there wasn’t a (3)):

On the negative side, releasing the lockdown

(1) increases the final number of deaths from the virus (as well as from other conditions which may get undertreated if health services become overstretched with COVID-19 patients).

This is head-shaking stuff. First of all, they think an increase in commuting, ie. people travelling to work, is worth putting on this list. Secondly, they put CO2 emission fantasy in there as well? And air pollution? Yes, air pollution is real, and no-one likes it, but how can you seriously consider this as something worth keeping lockdown in place for?

In fact, (2) is completely extraordinary when you think about it. These scientists consider that ordinary stuff like road deaths and air pollution and commuting (as well as made-up problems like CO2 emissions), things which we consider to be an undesirable but normal part of a free life, are part of the calculation of whether to imprison the populace or not? That is outrageous.

Then they have a table trying to put some numbers to these things.

First of all, they seem to think the deaths will be the same whether we release the lockdown on May 1 or Aug 1, because we have a badness of -158 for every all four lockdown release dates. If so, that entails that three extra months of lockdown (ie. keeping it going to Aug 1) will have no effect on the eventual deaths (a very dubious claim, it has to be said, plus their figure of 158 000 deaths now looks like modelling bollocks).

If true, that makes the lockdown in general pointless. If you get those deaths anyway, regardless of lockdown, then in what way can they be said to be an effect of lifting lockdown? And if they aren’t an effect of lifting lockdown, the -158 score shouldn’t be in there at all. (The only way this makes sense is if you have in mind an even longer lockdown, which Ferguson did in his original Imperial paper, but this isn’t discussed as a possibility here.)

It’s also worth a gasp at the fact that these idiots have given a total score of -30 to the increase in commuting, road deaths, air pollution and CO2 emissions that will result from lifting lockdown. To put this in context, this is six times as bad as sending kids back to school on May 1 is good. And apparently keeping kids off school for a further two months, and sending them back on July 1, is only two points less good than sending them back on May 1. The increase in commuting that will result from a lift in lockdown is, they think, five times worse than keeping kids off school for an extra two months, and the increase in CO2 emissions from a lifting of lockdown is 3.5 times worse than this.

It could be that the ‘benefit’ score of 3 for a school start of July 1 is just supposed to reflect the amount of time left before the summer holidays; the score of 0 for an August 1 start suggests this. But then that means that the downside of missing school for those extra months has not been included in the ledger at all.

What’s even more outrageous is that nowhere in this table is any consideration given to the fact that we are being imprisoned in our homes by the government. Their way of framing this makes that easier to leave out, but we can’t leave it out. We’re being subject to martial law, which everyone agrees is bad, but what score is given to the clear benefit of being free again? Nothing. It’s not even mentioned. Of course this is an extremely difficult thing to give a score to, even a comparative one, but not even including it all is scandalous. Apparently an increase in confidence in the government is worth something. But being let out of your house again is not even worthy of a mention.

Now, perhaps this study is of no consequence in the policy world, and doesn’t reflect government thinking. But I suspect this is very much the sort of thing that is getting bandied around government circles. My source says this is government-funded (based on money from this UCL-based study, resulting papers here). Richard Layard is a big name for this sort of thing. The dates tally up with what the government has been talking about. You’d hope that some better work than this has been to the fore, but the government’s continued preference for martial law, when Europe is opening up, suggests to me that what they’ve been looking at may in fact be even worse than this.

Update: As commentator Dene Bebbington has pointed out, this table also takes no account of public finances. But of course you would have to put into the positive side of lifting lockdown the fact that the government could then stop having to borrow such gargantuan amounts of money, and add in the fact that the economic disaster is going to be not as bad as it would be if the lockdown was kept in place.