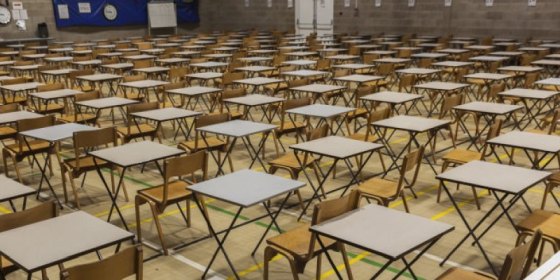 My eleven year-old daughter is currently under house arrest. She is not allowed to leave our home to attend school, to exercise, or to visit friends or family. She is not able pop to the shops to spend her pocket money, take her bike for a spin around the park or participate in her (beloved) ballet lessons. She cannot enjoy the last of the early autumn sunshine, get her football boots muddy or attend her singing lessons. The list of prohibitions goes on, with no exemptions stated.

What terrible crime did this eleven year-old girl commit to invoke such a punitive response? She must, surely, be a great danger to the population at large, to justify such harsh restrictions on her liberty?

My daughter’s only crime was to sit next to her friend on a twenty-minute coach journey to a Games lesson; a friend who four days later tested positive for SARS-CoV-2. Deemed a ‘close contact’ by public health officials, my daughter had to be collected immediately from school, and so began her incarceration.

Now of course, I understand the reasoning behind the requirement for my daughter to self-quarantine. The argument runs that, given her close contact with a positive case, she might have contracted the virus herself; and might, for the next fourteen days, be contagious; and so might, possibly, pass it on to someone else with whom she might have contact; and that person might be really old, or they might have underlying health conditions which makes them more vulnerable and so they might die!! Best surely, just to lock her up for fourteen days? It’s the kind thing to do, right?

As you can see, the self-quarantine policy is founded on an awful lot of conjecture. It takes the precautionary principle to an absurd extreme. Without interrogating each of these conditional assumptions individually, the weakness of this policy is evident from the fact that that my daughter has remained completely healthy since her contact with the positive case. In addition to this, all the people that she had contact with in the four days between sitting next to her friend and her confinement, have been fine too. This includes her class of twenty-one other children, her football team, the guests at her sister’s ninth birthday party, her French horn teacher (I thought wind instruments were supposed to be deadly?), and a dance class of around twelve. Did I forget someone? Oh yes, she also saw mum, who has stage four cancer. She’s completely fine. We’re all fine. Except perhaps my locked-up little girl.

Surely, it would be better to make policy, especially policy this extreme, based on established facts? It is now abundantly clear that children are at no risk from the virus and that they play a minimal role in the chain of transmission to adults; those at the greatest risk are the elderly and those with underlying health conditions. Given that the stated aim of this draconian policy is to ‘prevent the spread of the virus…particularly (to) those who are clinically extremely vulnerable’, would it not be eminently more sensible to insist that it is they that stay at home? In doing so we would effectively cut out the middle-man and thousands of healthy children could go back to work and play. When I proposed this on Twitter, someone joked ‘outrageous common sense! Send her to the gulag!’ It made me laugh and reminded me of Orwell’s dystopian ‘1984’ where, ‘the heresy of heresies was common sense’.

Actually, I would never propose an enforced quarantine of anybody. I would advocate for those vulnerable to Covid-19 to be able to choose how they would like to respond – to make their own personal risk assessment. Perhaps there could be some government support for those who needed it. Were this approach to be implemented it would free up an amazing £100 billion per year as the Moonshot project would be rendered unnecessary. Surely that would be more than enough to fully support people in their own homes, if that’s where they wanted to be?

And we all know that, in reality, those who are deemed vulnerable are already making those choices for themselves. That’s why we were at my mum’s when my daughter might have been contagious. Despite having been given ten months to live, she would far rather spend that time enjoying her family than sitting on her own at home because she might catch Covid and die a little earlier than expected. Conversely, my parents-in-law, both in their seventies have decided not to see their grandchildren until this has all blown over. Whether I agree with them or not, is immaterial here. What is clear, is that vulnerable people are already self-isolating where they see fit.

I am continually grateful for the contribution of Professors Heneghan, Gupta and Sikora (among others) in seeking to promote a more targeted approach. It is frustrating though that their voices are not cutting through more effectively. There appears to be a determination within government to ignore them – their invitation to No. 10 seemingly a token gesture. This was effectively confirmed by Whitty’s assertion in the coronavirus briefing, broadcast on 21st September that, ‘you cannot in an epidemic just take your own risk. Unfortunately, you’re taking a risk on behalf of everybody else’.

My hope now lies in the introduction of the new Self-Isolation Regulations which came into force on Monday. It would appear that the government may have finally overplayed its hand. The requirement for all close contacts to self-isolate for fourteen days is now clearly stated in law – any appeal to ‘it’s only guidance’, is now impossible. The maximum penalty for absconding has been increased from £1,000 to £10,000. And there continues to be no opportunity to gain an exemption with a negative test. I am, of course, appalled by this tightening of the screws but it has, at least, got the attention of some of our county’s top lawyers.

Questions have been raised about the legality of the new regulations, with reference to the Public Health Act (1984) being strained, and also regarding Article 5 of the European Convention of Human Rights. I’m not a lawyer, but as a mother witnessing first-hand the fallout of a government that refuses to refine its policies, I hope they are finally held to account in the courts. I don’t know what the penalty for false imprisonment is, but wouldn’t it be wonderful if the punishment were to fit the crime?

Update: Please support this website by donating via KoFi, subscribing via SubscribeStar or Patreon, or buying my book (see right-hand sidebar for links). Independent media like Hector Drummond Magazine, and my constantly updated Twitter and Parler accounts, cannot survive without your support.

Update 2: Sorry for lack of posts in the last few days, it’s purely because there is now so much to get on top of, and today I was helping out one of our most admirable journalists. (Let’s just say that things really have changed at the Daily Mail.) I have some good articles in the pipeline ready to go, plus more graphs, which will be going up over the next few days.