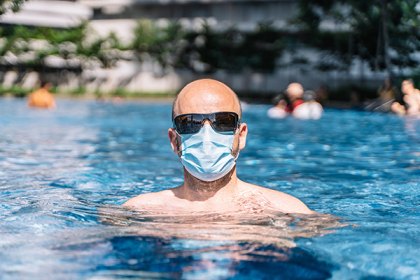 On Saturday I took my youngest daughter swimming for the first time since March. She’s a bright and loving child but quite nervous and lacks the confidence of her older sister. As such, swimming has been something of an uphill struggle and though she made progress over eighteen months of lessons, these gains naturally fell victim to the lockdown earlier this year. I had received a brief notification from the swimming school several weeks ago that “social distancing measures” had been put in place and so was somewhat equipped for a different experience, but nothing could have prepared me for what was about to happen.

Allow me to briefly outline how this routine played out prior to lessons being cancelled in March. We would arrive at the car park, I’d walk my daughter over to the building, sign in at reception, walk to the changing rooms, take her back down and onto the poolside. I’d then wait in the crowded corridor outside and watch her swim through the glass along with the other parents. Thirty minutes later I’d collect her from the poolside, take her back to the changing rooms then finally out to the car and home. All rather simple and normal wouldn’t you say?

On Saturday we arrived outside the building and there were only four other parents there, all of whom were wearing masks and shuffling about uneasily in the spacious sunlit playground. The receptionist opened the door and called the children in. I was informed that I could not go in with my daughter so she went into the corridor and was asked to leave her socks and shoes on the side. Here, she began to struggle and so started to call to me through the glass windows, beginning an infuriating game of lip-reading with me mouthing instructions. Eventually, I asked the receptionist if I could go in and help her.

“No, you’re not allowed to,” came the reply.

At length she managed to get herself sorted and disappeared off to the pool.

“Please go and wait in the car,” the receptionist told us parents. “Come back at five to three.”

With something of a lump in my throat (I’m afraid I’m unable to adequately describe these sorts of emotions to non-parents) I trudged back and sat in my car, wondering if she would be okay, if she would manage to get herself changed properly, how much her swimming ability had deteriorated since March, if she would be manage jumping in and so on.

At five minutes to three I went back to the playground and discovered that miraculously the threat of the virus lingering in the corridor had disappeared in the twenty-five minutes that I had sat in the car, because I was promptly invited in to fetch her. However, this required me to wear a mask (I don’t own one so had to use a running snood pulled up over my mouth which in itself tends to elicit a great deal of disapproval), plastic overshoes and lashings of hand sanitizer.

My daughter was on the poolside at the far end and it’s a wonder I didn’t slip and fall into the pool with my feet transformed into giant blue bars of soap. She had been made to sit on a designated circle, despite the fact that there were only three other children in the entire pool. I then had precisely one minute to get her onesie on, which might sound a lot, but when you are dealing with a child who is not especially well-coordinated (this garment having to be prised on over a wet swimming costume on a humid poolside because they are not allowed to actually take clothes off) it is no mean feat.

It was only when I finally succeeded and began to lead back down the poolside to the exit that I was struck by the atmosphere. A swimming pool is usually very loud with children shouting and splashing about and the noise reverberating across tiled surfaces and echoing back across the surface of the water. Here, there was nothing. It was still and silent, and incredibly eerie. I turned to look back at the pool itself and there were six swimming instructors, all wearing their black t-shirts and each with a plastic face shield, even whilst in the water.

In the corridor outside I endured a similarly frenetic exercise, having to put her socks and shoes back on with wet feet, a race against time in which I made a furious mental note to bring her in sandals the next week whilst all the while the receptionist muttered at me for taking too much time. Only when we left the building were the next group of children allowed in – another four bemused children about to enter this utterly inexplicable dystopian process.

Leaving aside the sheer economics of the situation, that there were more instructors than children and therefore it would only be a matter of time before the swimming school goes bust, I still cannot fathom what took place. That over the course of a five month break those who run the school came to the conclusion that these measures were necessary; that this would be a suitable environment in which to teach young children; and moreover that their actions would put parents at ease. On the contrary, for it is abundantly clear that many have either taken their children elsewhere or just given up on swimming entirely.

By their very nature children are resilient, of that I have no doubt, and yet I cannot accept for a moment that these bizarre measures will not have some sort of longer term impact on young ones. After all, imagine being six years old and having swimming lessons return after an absence of half a year only to be taught by someone wearing a protective face shield whilst your dad is banished from sight. If this is the “new normal” then forget it, it stinks. It is a psychological nightmare that I’m afraid is playing out throughout the entire country, the effects of which will be with us for an entire generation.