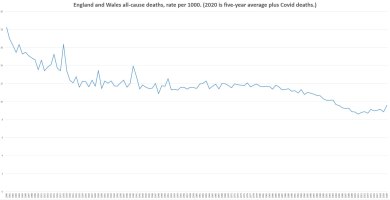 Note: This is an update of my earlier post ‘This is what we screwed the world for‘. If you’ve read that one already you can just skip to the population-adjusted graph, which is what I’ve added in this post.

So I have taken the ONS’s annual death figures for England and Wales and graphed them all the way back to the turn of the twentieth century. Then I thought: what if we presumed that the death toll for 2020 is the five-year average plus the Covid-19 numbers? That will be a high estimate, as it’s likely that many of the people who died from Covid-19 would have died this year anyway, so the real annual total is not likely to be that high. But I thought, let’s see what that number would look like anyway.

(A complication is that lockdown itself could kill considerable people later this year with all the delayed cancer treatments, but any such deaths should not be in my graph anyway, as they are deaths caused by the lockdown, not Covid, and I’m trying to show the effect of Covid).

The five year average for 2015-19 is 531,355 deaths per year. As of writing this there were 42,462 Covid-19 deaths in the UK (from this site). There are likely to be a few more deaths in the next few weeks, but not many more, as the disease is (barring an unlikely second wave in winter), gone. Besides, the number we are adding on here is for the whole of the UK, not just England and Wales, so if anything this number is inflated. That gives us 573,817 deaths for 2020. I added that into the spreadsheet and the graph. Then I got hold of the historical population figures for England and Wales, and calculated the death rates per 1000 from it, so that population increases are taken account of. Here is the result, with 1900 on the left, and 2020 on the right. (Click to enlarge.) 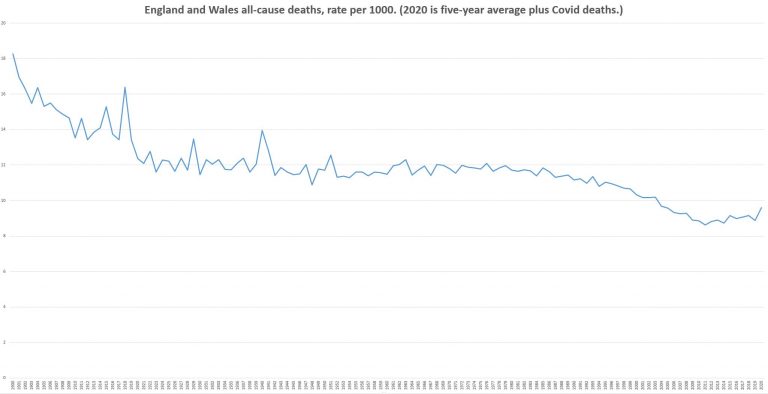 So: no gigantic, bowel-emptying spike in 2020. No jaw-dropping upwards vertical rocket-ship to match those jaw-dropping downward vertical cliffs we saw with the economic data. Just a tiny little uptick, like many other little upticks in there, indistinguishable from random noise. If you asked someone in the future who was unacquainted with the era to point to where the once-in-a-century medical disaster was, they would have no chance of picking it out.

A plea: Many thanks to those people who have supported me recently, I’m really grateful. You can do that by sending a donation my way via Ko-fi, or taking out a Patreon subscription (links on the right-hand side). Also please buy my book!