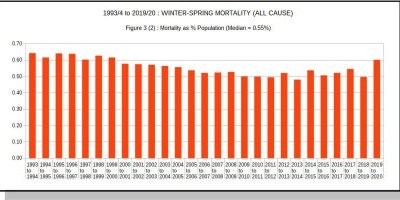 From Rick Hayward. Remember Rick did this great post last week? It featured an astonishing  graph of winter-to-spring mortality for all years in England and Wales from 1993-94 to 2019-2020, with numbers from the ONS, which showed that 2019-20 was only slightly bigger than all the other years (click to enlarge): 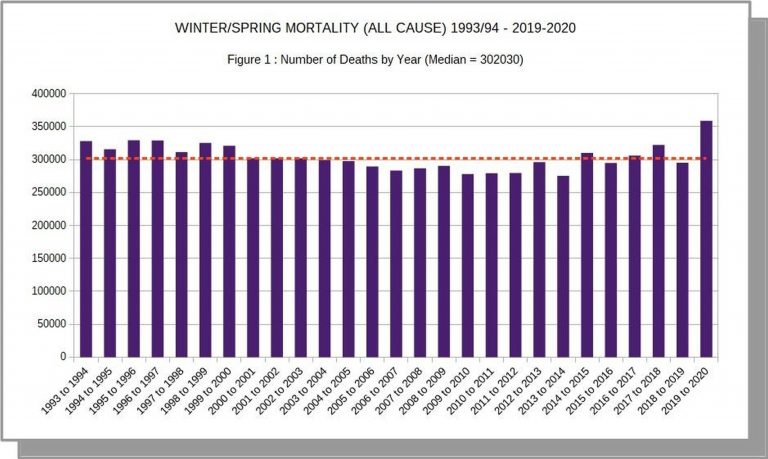 I wondered whether Rick was able to do the same graph again but this time adjusted for population, as I knew Rick had got hold of the England and Wales population stats. So he did, and it’s truly astonishing. Click to enlarge. (I’ve added this graph to his earlier post now as well.)

So: 2019-20 is only the eighth worst season in the last twenty-six. So there you go. This unprecedented slaughter that the doomsayers in the government/academia/media, and social media, would have you think has been happening, this once-in-a-century Biblical plague that is upon, is not even close to being no. 1 in the last quarter century. But somehow our government, our scientific advisors, our academics, our statisticians, have all failed to tell us this, despite the relevant numbers being all publicly available, and the work involved being fairly simple for anyone with a bit of basic knowledge about numbers. Instead it’s been left to amateurs, data people from the business world, and rogue academics and ex-academics to do the work, to pull the numbers together and make the graphs. Graphs which the ONS people could have easily made. But they didn’t.

Of course, some people will say, upon seeing this graph, ‘Aha, what this shows is that the lockdown did, in fact, work’. Some academic said precisely this about my historical graph of mortality going back to 1900, which I posted about here, and which I also wrote an article about in the Critic here. But of course there is no evidence that the lockdown had much effect. Sweden, for example, turned out little different to England, and to many other European countries. Also, it turned out, Sweden’s April and May, their worst months for Covid deaths, were nothing special in the context of the last twenty years – there are graphs around about this, which I must write an article on. So what you are seeing is pretty much how it would have been without lockdown. In fact, in all probability what are you seeing is actually higher than what you would have seen without lockdown, because then you wouldn’t have had all those excess non-Covid deaths caused by lockdown and its attendant hysteria, and the all-cause mortality figures would have been lower

As I’ve been saying for months, Covid-19 is a not-especially dangerous virus, in the context of other winter viruses like flu. Not that I like seeing anyone die of it, but it’s no different to flu, about which we have never gone bananas and destroyed the country over.

Update: As Rick’s original post made clear, the period covered ends at the end of week 20, which this year was 15 May. At that point the great majority of England and Wales Covid-19 deaths had happened. A week later and the weekly death figures were back to being around the five-year average.

67 thoughts on “Another jaw-dropping graph”