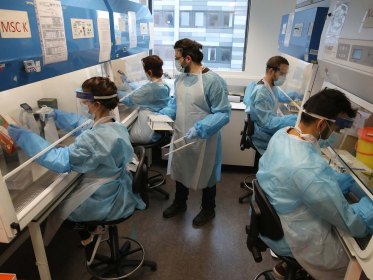 I’ve previously looked at some of the issues that can arise with PCR ‘tests’. Another issue is that samples can get contaminated by the SARS-CoV-2 virus from the sampling environment, or from the workers doing the swabs, or from the lab, and this can cause a positive result. Remember that because of the amplification process you only need the tiniest amount of SARS2 to get in for the test to be positive when it shouldn’t be.

As HD Mag commentator Gavin Longmuir said, “The degree of cleanliness required in a laboratory where something is being multiplied to a billion times its initial presence is truly staggering.” And if you go up to 35 cycles we’re talking 35 billion copies. With 40 cycles it’s 1 trillion times. So the contamination can be extremely tiny, and still produce a positive result if enough cycles are run.

As winter draws closer we can expect SARS2 to start becoming more prevalent again, but that also means there is more chance of contamination, as there is more of the virus around to get where it shouldn’t.

We should also not forget that the UK is currently processing at least a quarter of a million tests per day. A QUARTER OF A MILLION. EVERY SINGLE DAY. Sometimes almost 300,000. My last post explained what is involved in running a PCR test. Even running a single test is not a simple matter. There are complicated and lengthy processes that the samples have to undergo to produce a result. There are complicated and time-consuming protocols, from the swabbing to the transportation to the lab work, that have to be observed for every single sample to minimise the number of false positives and false negatives. It’s not easy to get these right at the best of times. Much care is required. In these chaotic circumstances, I’d say it’s pretty much impossible to be following best practice, especially with Pillar 2 community testing.

And here’s some evidence for that, from a Times article:

Documents also show that voiding – the disposal of used tests due to human or technical error – has shot up. Randox, which won a £133m testing contract unopposed at the start of the outbreak, disposed of 12,401 used swabs in a single day on September 2. The company, which is based in Co Antrim, Northern Ireland, has voided more than 35,000 used test kits since the start of August.

Civil servants and laboratories have pointed the finger at each other for the chaos. Internal reports state that tests are mostly voided because of “swab leaks” and “damaged tubes” during transit, or human error, such as people sending urine rather than saliva.

But officials have cast doubt on the feedback coming from some labs, saying that they are freezing or throwing away tests after an arbitrary period.

Part of the problem is just the sheer enormity of the manpower required. You need an awful lot of staff to run this many tests every day.

It was claimed last night that Randox had blamed the high void rates on staff going on holiday. The company has not denied charging the taxpayer for voided results, but disputed the claim that it blamed employees taking leave.

Staff have claimed that they are working 12-hour shifts at close to minimum wage to clear backlogs.

So more staff are required, and the labs are advertising. Naturally only highly trained people with scientific backgrounds, or at least previous lab experience, need apply, right?

Last week Randox placed job advertisements in an attempt to increase the workforce at its Covid laboratories. One ad read: “No previous experience required.” The adverts said: “It is NOT essential to have a science background.”

Oh. Still think that the results from this company are going to be completely accurate?

The same article also reports that because of a massive backlog in tests many of them had to be sent to Germany and Italy, where they are given low priority, and many are voided because they were transported at the wrong temperature.

Most of the Pillar 2 tests are being processed by the ‘Lighthouse labs‘ that were specially set up in response to the pandemic. Wired reports:

These have largely relied on equipment and volunteers sourced from universities and were tasked with expanding the UK’s Covid-19 testing capacity over the summer. How they are functioning at the moment is unknown, says Allan Wilson, president of the Institute of Biomedical Science. “We don’t have much of a handle of what’s going on in the lighthouse labs. They have been shrouded by secrecy, really,” he says.

One source who worked at a lighthouse lab, but who has now returned to their university, says that they were aware of staffing issues towards the end of the summer. “Masses of volunteers left and I know for a short stint there was a lack of hands,” they say.

Again, are you really sure that best practice is being adhered to here? Are they, for example, always using single-use equipment to minimise the risk of infection?

One diagnostics equipment provider supplying such facilities who wished to remain anonymous says that some labs were facing a continued shortage of single-use equipment, which has plagued British efforts to tackle the pandemic since the start.

Wired also report Jon Deeks, professor of biostatistics at the University of Birmingham, as saying about tests:

“I don’t understand what’s happening at all. It’s desperate. The government has been very secretive about all sorts of things with testing. What actually the problem is, we need to know and we need to get it sorted.”

And here’s another Times story:

Government laboratories that are processing coronavirus tests use cumbersome techniques, are running out of staff and have failed to set up automatic processes before a second wave…

A Times investigation has uncovered claims that the Lighthouse Labs, which receive samples from members of the public, are rife with inefficiencies…

The labs are so inefficient they have been using 20 different types of tube for swabs, according to an expert who has visited one. Samples had to be opened, recorded and prepared by hand, with staff working in pairs to verify each other’s work. “I was appalled at what I saw,” Phil Robinson, the genomics scientist and inventor who was invited into the labs, said.

Tens of thousands of parcels arrive at the labs each day. Staff have to open each package, take the tube out, open the lid, pull out the swab and use a pipette to prepare the sample for testing. Workers have described how they operate in a buddy system with a colleague present to verify each stage.

“Even with two people, with the best in the business, they make mistakes,” Dr Robinson said. This procedure should have been automated using robot technology, he argued.

“Every part of the process was poor. The other ludicrous issue they have is they have 20 different types of tube coming into the lab. When you are running a high throughput lab it’s only sensible to have one. Why they haven’t standardised that I have no idea.”

Another issue with the Lighthouse labs is that

They were originally manned by students and academic laboratory workers but that workforce is returning to campuses. A recruitment drive has begun.

That’s sure to be a success, isn’t it?