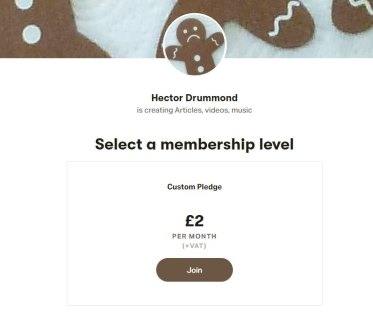 I’ve changed the cost per month of a Hector Drummond subscription: the new charge is a measly £2 a month (GBP) at Patreon, or the slightly cheaper price of $2.50 (USD) at SubscribeStar. Less than the cost of a half-pint in a pub, and you can’t even buy those any more. I’d rather have more subscribers at a cheaper price than less at a higher price.

If you are an existing subscriber you may need to actively switch to this pricing as I don’t think either of these services switches you over automatically. (If you dislike Patreon you can take this opportunity to cancel Patreon and move to SubscribeStar.)

I’m going to get started with subscriber content now. I will be doing articles, of course, but also videos, livestreams and satirical songs. (If you are doubtful about the latter I can promise you they will be bloody good.) This content will not be available here but on Patreon/Subscribe Star. Most of it will not eventually become free to view, BTW, and even for that content which does there will be a significant delay, not just a few days like you get with James Delingpole’s videos. I will occasionally put up what I think is an extra-important article here, and I’ll put up the occasional sample video here or at a video-streaming service to show what I’m doing, but generally this material will not be available to the public.

I’m also getting off Twitter and moving to Gab at https://gab.com/hectordrummond (and maybe Parler if it ever gets going again), but in general I won’t be doing much social media from now on, I’ll be focussing my efforts on subscriber content. (Note that Gab is still not working properly yet due to the incredible demand it’s currently undergoing, and also because it it getting constant DDOS attacks.)