[Update: For Breitbart readers I need to make it clear that 2020 respiratory deaths are actually below the five-year average. Yes, below, not above, as Dellers assumed in his article. I didn’t spell this out enough in the text. HD]

Two brilliant readers of this blog have taken the time to graph up the relevant ONS death figures, and they are very revealing. You can see so much more at a glance that wading through all the figures yourself.

Firstly, David Clark (himself a researcher) has done these two (click to enlarge): 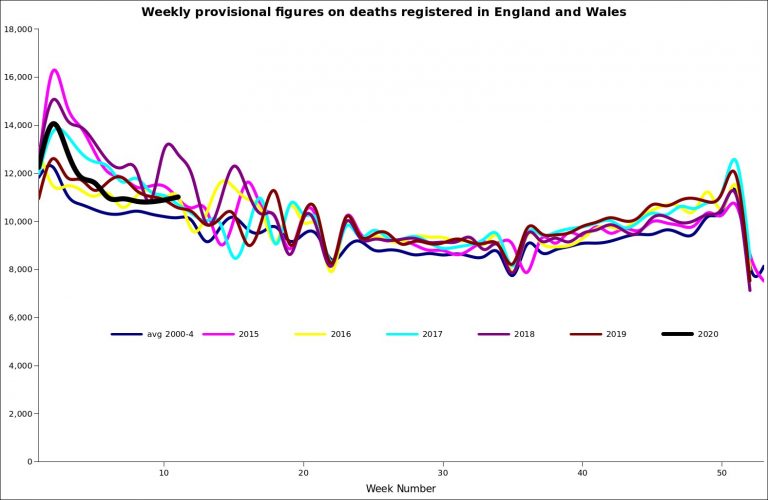 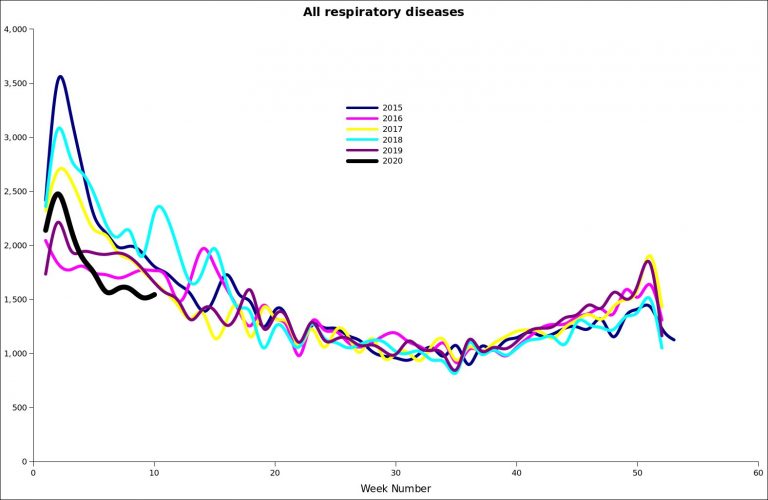 No sign of a once-in-a-century disaster there, though of course the panic merchants are saying ‘You just wait, it’s coming’.

And Robert Watson ( a retired Professor) has done this one (click to enlarge): 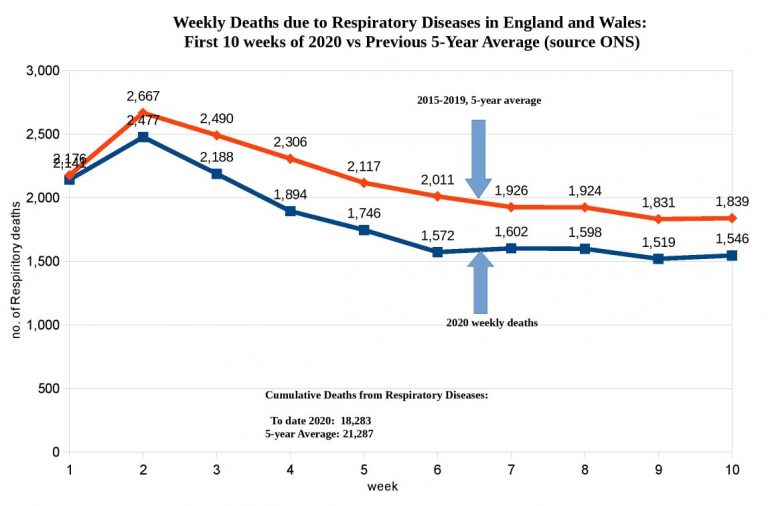 Robert notes that there is currently a gap of 3004 respiratory deaths between now and the average of the last five years. [Update: To be clearer, the 2020 respiratory deaths are 3004 below the five-year average, not above, as you would naturally assume. HD] Still think it was right to trash the economy and introduce a police state?

And there’s also this one I posted the other day which graphed weekly deaths for 2020 against the five-year-average (done by someone called Alistair Haimes) (click to enlarge):

And (also from Alistair Haimes) the cumulative deaths (for all deaths, we’re 5000 deaths under the average for the last five years (click to enlarge):

On 31 March the ONS will be updating the death stats, so we can get some further info on the period when supposedly Covid-19 started to ravage the country. But it’s clear that the gap (currently 3004) is not going to disappear even with the latest Covid-19 deaths. There’s only 1019 of them in total in the UK, and even if we suppose that they really all are Covid-19 deaths, and that all of them really are excess deaths, we’d still be looking at less respiratory deaths than normal (remember that the current average deaths will also rise in that time).

Thanks very much to David and Robert for doing these graphs.

Update: I should also note that the ONS has now added a row with the respiratory death figures to their Excel death sheets, so finally someone there is doing something useful for the current situation. But why can’t they do some line graphs? Why are my readers having to do their job for them?

35 thoughts on “The graphs of nothing-much-to-see-here”